For People with Beards, and Those Who Love Them

For the first time in I don’t know how many years, I’m still wearing my winter beard half-way into April. It is usually so beat up, brittle and tired by the time spring arrives that I just hack it off and hang it in a tree so birds can use it in their nests, but not this year.

My feathered friends will have to wait a while (maybe longer) until I am done with my beard. Yes, it’s kind of grown on me and no, I didn’t lose my clam shell, but my beard is near the top of  the list of things that get me through winter and now I’ve found a way to get my beard through winter, too, thanks to Feared Beard VT. 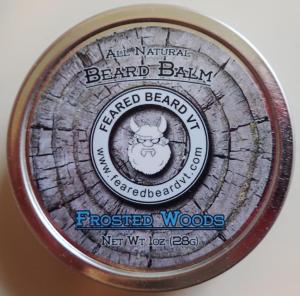 Before anyone goes off the rails and starts in about doing a product review or questions my qualifications to write about grooming, I’ve done reviews here before (a list of them, and a disclaimer for this one can be found below) and this is me after all, so the term “grooming,” is used rather loosely. In addition, there is nothing ironic about my boots, my flannel, or my beard so don’t be thinking I’ve gone all hipster or something. 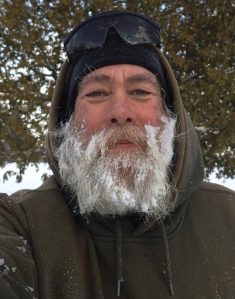 A trip around the lake on snowshoes (or six trips up and down the driveway behind the snowblower) can leave my beard full of ice, frost and frozen who-knows-what. I have yet to find any source recommending that sort of thing for any kind of hair. No silly scarves for me to keep my face warm, no sir, but all that freezing does take a toll.

Then, after the worst of winter is done and it looks like spring might be right around the corner, it’s time to make syrup so I spend hours and hours tending the arch, opening hot cast-iron doors and putting my face close to a roaring, searing fire — something else you won’t find on a hair care “do” list. You won’t find it specifically on a hair care “don’t” list, either, but not just because sugar house stokers are an under-served demographic. 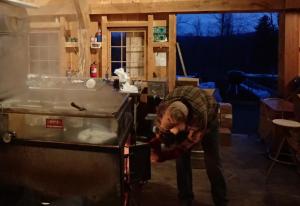 Face to the Fire

The smell of burnt hair is thankfully rare but going to the edge of combustion on a regular basis is as bad for it as being frozen. All that extreme heat and serious cold, along with the naturally unruly behavior of long whiskers, adds up to a beard in need of serious help and I think you can understand why I am sometimes anxious to whip out the old clam shell as soon as spring arrives.

I’ve used different shampoos and conditioners, with varying results. I’ve tried oils for beards and oils intended for salads and didn’t like them one bit. Fly-aways, split ends and breaks were just a price to pay for having a hairy face when the nights turn hoary — until I saw a display at the Vermont Country Store last December, featuring beard balm from Feared Beard VT.

Beard balm sounds funny to say, at least to these modern ears, but the tradition goes back thousands of years and after a few days its charm and benefits were apparent. As a fan of patchouli, I’d gone home with a tin of Burlington Burnout and not only did it remind me “of that time I can’t remember,” — just like the copy on the web site says — but my beard stayed the way I put it when combed and developed a shine.

After a good, hot shower and shampoo, Feared Beard balm really soaks in and doesn’t feel heavy or greasy. The scent didn’t scare the cats and it made Mrs. Gordon smile so I went down the hill again the next week, to pick up a tin of their Frosted Woods. “Chock full of pine and spearmint,” it made my beard smell minty-fresh, making it a good alternative for occasions when one might be around others not so fond of patchouli or likely to question the motives of those who wear it. 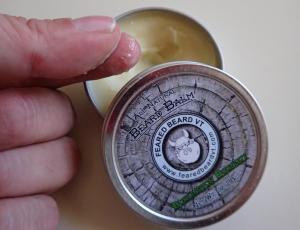 Remember, these are scents, not flavors, and Feared Beard’s Natural beard balm doesn’t smell like much of anything. It is their base formula, with no fragrant oils. Some people may experience mild skin irritation with some fragrant oils and this is a good choice for them. Or, maybe you don’t want anything to interfere with other scents you like to wear. Of course, sometimes the best choice is no scent at all.

Made from shea butter, coconut oil, beeswax, and the seed oils of jojoba, grape, moringa, baobab and hemp, as well as other ingredients, depending on product, Feared Beard VT‘s beard balms use organic raw materials whenever possible and are 100% natural. More about their ingredients can be found here.

Two other scents are available, Lifted Lavender (with rosemary and juniper!) and Citrus Orchard (“you’ll feel as though your beard is living the life of luxury”), both of which I intend to add to my repertoire, if only for myself. After all, if they’re going to cover half my face and hang out below my nose, those whiskers ought to smell nice, too.

A little bit goes a long way. Feared Beard VT beard balms come in 1 oz. tins ($16, from their web site) and are available in such far-flung locales as Jamaica, VT, Silver Lake, CA, and Canmore, Alberta. A full list of shops carrying Feared Beard VT can be found on their site.

Feared Beard VT also produces beard oils in the same scents as their balms, as well as hand made soaps — saponified, cured, packed and shipped in-house — featuring detoxifying clay with cedarwood or exfoliating coffee and oatmeal with vetiver and bergamot. In addition, boxed gift sets are available, with your choice of balm and oil along with a spiffy “Fear the Beard” wooden comb for even distribution.

My beard has been repeatedly frozen and has come close to bursting into flames several times over the last six months but it smells nice and remains soft and shiny, even after all that abuse. Feared Beard VT got my beard through a Vermont winter so I reckon it can get yours (or that of a loved one) through whatever it is you/they do, whether working at an office, in a circus, or even mom’s basement (get it together, man). 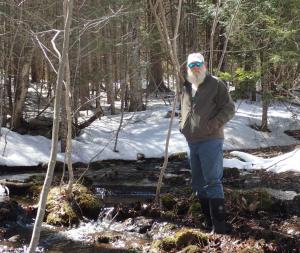 Go ahead, grow that beard and wear it with pride. Fret not; Feared Beard VT will help keep it in good shape and smelling nice, too.

That link, one more time, in case you missed it the first seven times: Feared Beard VT

Disclaimer: Feared Beard VT did not approach me to do this review. It was completely my idea. I’ve had a couple of email exchanges with Kyle Donovan, the mad scientist behind the curtain and, other than a rather nebulous and non-committal mention of a possible cedarwood-scented balm, there is nothing in it for me. We’re supposed to write about what we know and I know beards. So does Feared Beard VT.

Other reviews that have appeared on this blog:

Book Review — “By a Thread, a Retrospective on Women and Fly Tying” by Erin Block

Flies — “Owl Jones Flies (But Don’t His Arms Get Tired?)”

Who’s next? I can wreck boots and rip pants with the best of them and am equally at home putting rain suits and fly rods alike through their paces.

And, because this year’s “Flashback Friday Shaving Edition” will be delayed indefinitely, here’s a link to the one from 2014; sort of a flashback flashback:

7 thoughts on “For People with Beards, and Those Who Love Them”