(This assignment is overdue. The items in this review arrived in September, which is now known in these parts as “the month we spent cleaning up after That Bitch, Irene“. I was concerned enough when the package arrived to open it right away but it has taken until now to post my review. Excuses? Which ones do you want to hear? I’ve got a million of ’em.)

Baseball is a contest of skill. Consequently, I was no good at it, so when a contest comes along that involves nothing more than dumb chance, I’m in. Such was the case late last summer when Joe Wolf from the Outdoor Blogger Network announced he was moving and wanted to shed some of his accumulated stuff. Some lucky winner would be chosen, at random, to receive a box of that stuff, which Joe promised would be appropriate. My best effort turned out to be good enough, and I won!

I was a little worried when Boogie, our Rural Mail Carrier, dropped the package at the door, my first thought being, “Oh, no! My new puppy!”

I was very relieved, but more than a little disappointed, to find the box did not contain a puppy. 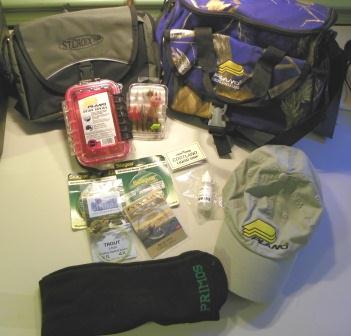 Joe didn’t actually promise a puppy but he did promise the contents of the box would be appropriate to the winner. I must say, it was almost as if he knew I am a fly fisher!

This nice lumbar pack will take the place of the 57 pound, shoulder-slung gear bag I usually throw into the boat, and it has already seen a few laps on the trail around Fish in a Barrel Pond. Some people might call this a “fanny pack” and if it only held a portable electronic device, a granola bar, and a bottle of imported water, they would be right.

This nifty box is a perfect waterproof case for my waterproof camera (Joe evidently forgot to include a camera so I had to use my own)!

It says “Plano Tackle Systems” on it but the collapsible tackle box makes a great soft-sided container for lunches, snacks and such. With this camo choice I certainly won’t lose it in the woods in winter, but I should be careful about hanging it in a tree on a nice October day. 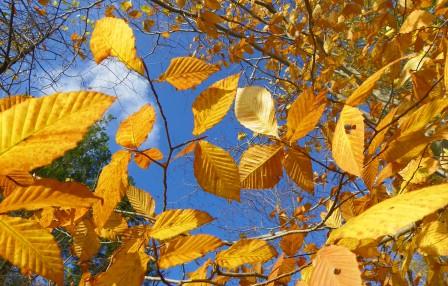 An angler can never have too many flies, so Joe also threw in a small fly box and a couple dozen flies. 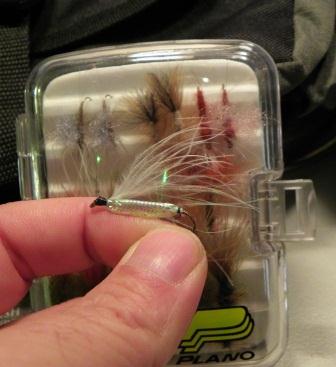 It was late in the season before any of those flies got wet, and some will have to wait until next year for their chance to see fish, but these little tube-bodied flies with a marabou wing sure worked well. Cast out on a sinking tip and brought back with a slow, jerky retrieve, about four feet down, the late-season rainbows found them downright irresistable. One of these flies was last seen streaking away on the jaw of a very nice silvery fish.

Brought back with a slow, jerky retrieve, about six feet down, I lost another one to the rock I know darn good and well sits forty feet out from the northeast corner of the dock. That Joe must be practically psychic because he thoughtfully included a few spools of new leader and tippet material. 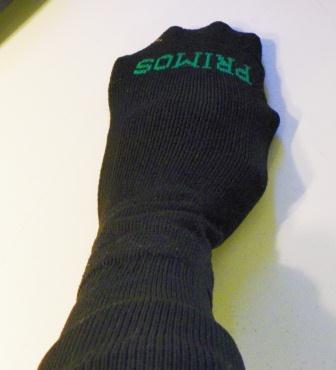 These babies are great! My thumb can huddle for warmth with the rest of my digits instead of hanging out there all by itself, and the extra long cuffs come clear up over my elbows! I believe that in high society and fashion circles this length is known as “opera”. I can hardly wait for theater season!

Thanks, Joe! You can send me boxes of extra stuff any time. I was only kidding about the puppy, but I have to admit it did cross my mind that somehow, in the confusion of moving, you could have accidentally sent the wrong box, and this could have been a review of your old underwear.

(Joe Wolf and Rebecca Garlock are the founders of the Outdoor Blogger Network. In just over a year, OBN has grown to include more than 1,000 listings and has a very active, engaged membership (except for me and a couple of other slackers). I am sure they had no idea how big of a deal OBN would become, but I hope Joe and Rebecca are as pleasantly surprised as the rest of us. I have made some good friends through OBN and have a constant supply of fresh, original content to read because of the hard work (and love) Joe and Rebecca have put into it.

To Joe and Rebecca, I say thanks!)

9 thoughts on “Outdoor Blogger Network Gear Review: A Box of Stuff from Joe”