Owl Jones Flies (But Don’t His Arms Get Tired?)

Fame can be a dangerous thing. Just look at all the people out there who are only famous for being famous and the train-wrecks their lives can become. It can also be dangerous for us, the spectators, as our desire for famous people is filled by the likes of Justin Bieber and that Lady Gaga fellow. The internet was abuzz last week when Justin Bieber got a haircut. Big deal. He’s what, 12? When Quill Gordon gets a haircut, that will be news.

Owl Jones recently opened the internet portal to his empire at OwlJones.com. I worry about him, hoping he can handle the fame and adulation, and I hesitate to stroke his already massive ego by writing nice things about him. To keep my pistol-packing pal from Georgia on the straight and narrow, I will not discuss his singing, dancing or film-making abilities. I will leave his regal bearing, trend-setting style and natural good looks out of this discussion, but he does have deceptively dainty fingers.

Owl ties flies. Some of his creations are displayed and available for sale at his appropriately named page “Owl Jones Flies”. Once you have entered the OwlJones.com portal, there is a tab at the top of the page labeled Blue Ridge Fly Patterns to take you there, too.

I ordered the zebra midges above, and a dozen of his “EZ SK8R Caddis” before the grand unveiling of the new Owl Jones headquarters. In fact, it turns out I ordered these flies during the time he was working out his nefarious plan to dominate the internet through his new web site and, even with everything else on his plate, he tied these flies and got them to me promptly and safely with no fuss at all. That is more than can be said for some bigger, better known sources. 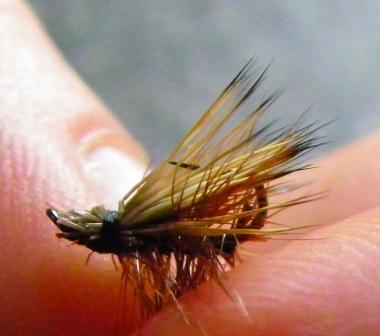 The caddis are tied so the hook point is on top and doesn’t drag when the fly is “skated” across the water. The hackle is plentiful and stiff so I expect these flies to ride high and skate well. Owl ties them for rough water and some people might think them inappropriate for still water, with all that hackle. Normally, I would agree that flies for lakes and ponds should be tied sparsely, especially those that are fished “dead drift”, allowing the trout a good long look, but to immitate caddis or midges streaking across the surface, that thick hackle will keep these flies up on their tippy-toes where they belong. (An aside: Owl Jones claims his caddis are “bullet proof” but I have yet to hit one. The real test, I suppose, will be the teeth of trout because I am out of patience for standing in the snow, trying to hit a #18 fly from fifty yards out.)

I have found Owl Jones to be an honest and generous person and his flies are as intricate and well-tied as any I have seen. They will have a spot in my fly box and you should save room in yours for some, too. It will be two months before I can give these southern-tied stream flies a workout on this little New England pond but I have no doubt they will catch fish.

Direct your browser over to OwlJones.com and order some flies! Tell him Quill sent you. 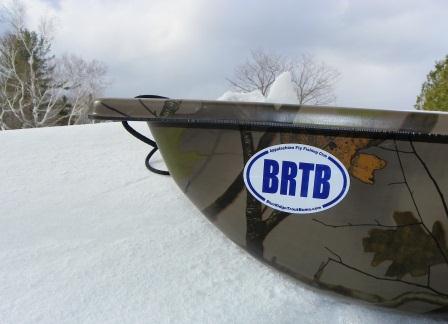 (Owl also sent me a couple of nifty Blue Ridge Trout Bum stickers to dress up my Shappell Jet Sled. I would like to offer this same unsurpassed sponsorship opportunity to my other readers. If you, your business or your organization would like a spot on my sled, drop me a line using the “Contact Quill” tab at the top of this page and we can work out the arrangements. The cost to you? Not a darn thing [other than the cost of a sticker and postage]. Your message is guaranteed to be seen by various woodland creatures and at least a dozen readers of this blog.)

3 thoughts on “Owl Jones Flies (But Don’t His Arms Get Tired?)”