Startled awake by who knows what, Quill Gordon came-to face-down at his fly-tying bench. Slowly, he realized the wail he heard was not banshees at the door, just cold wind in the chimney. In the thin, feeble light of dawn, on the first day of the new year, he saw in his hand a Mason jar, the one in which he stored head cement thinner, now empty. Belching, he came to grips with the fact that, apparently, he had consumed the entire contents, no doubt in some sort of shack nasty-induced rage.

Shaking off a shaggy coating of cobwebs and dust, he sat up. Clipped deer hair covered the floor like whiskers in a sink. Afraid it might not actually be deer hair, and fearing the influence of such volatile fluids as blackberry flavored head cement thinner, he felt with his hands for his beard. It was festooned with hackle feathers but, much to his relief, largely intact, though noticeably grayer and longer than he remembered, as if an entire decade had passed.

Disoriented as to both place and time, he shook off more dust, looked again at the empty jar and said to himself, “I don’t know what they put in this stuff but that was one hell of a dream.”

He’d dreamed a world where he was surrounded by nothing other than nature and scenery and fly fishers, all day every day. He did not dream of being named Worldwide Guide of the Year, ten years running. He did not dream of flying in helicopters to bake mini soufflés for taimen anglers in Mongolia or even vacuuming shuttle vans in Montana.

No, the world Quill dreamed was full of fly fishing traditions and fellowship in the embrace of Nature. In fact, it practically overflowed with Nature, and everywhere he looked there was scenery. As for fly fishers, he was up to his elbows in anglers and some of them had been coming around for 80 years. In pursuit of the mythical ideal of fly fishing’s Golden Age, those anglers had become an eclectic lot. Why, some were perfectly content to bake their own mini soufflés — as long as the camps had enough ramekins and appropriate stemware.

Their lake became a familiar friend, and its trout worthy adversaries, as time flowed by. Eruptions of midges after ice-out, mayflies flitting in June’s solstice dusk, and late summer ant falls marked the days as season after season slipped past. Late one Sunday afternoon (so no one would be around to see he was fishing), Quill Gordon cast a #14 red Humpy near the base of an ancient bank-side hemlock for what must have been the 1,000th time and, for the 999th, it was taken by a trout.

A leech pattern over a big rock pile brought much the same response, as did a tiny little Pheasant Tail nymph into the skeleton of a downed birch. Fishing the same tussock over and over again was in danger of losing its luster.

But no one ever questioned Theodore Castwell’s worthiness to wield a fly rod and Quill’s dream took a turn toward the surreal when someone wondered aloud if he deserved to be fishing. He dreamed he was so upset that he called his mother and she was devastated by what he told her. She thought he’d been playing piano in a Montreal whorehouse and the fact he was involved with fly fishers nearly broke her little heart.

Quill dreamed he took solace in activities like cleaning bacon grease from septic filters and seeing to fishing camp things like lemon zesters and melon ballers — he even learned to tell the difference between a glass for red wine and one for white — but, somewhere along the line, someone called “bullshit”, someone else called it right back, and then things got really weird. The dream acquired a soundtrack and Clint Eastwood started singing. That was followed by fat Elvis and eastern Europeans with outrageous pompadours doing Led Zeppelin.  Then, with Harpo swinging from a light fixture, Groucho Marx sang on a circus train, so Quill cut the grass. Salvador Dali and a giant singing clown appeared and, after that, all he remembered was some guy named Natty Bumppo and swarms of baby spiders before waking up.

It was one hell of a dream.

For the last 10+ years we’ve been playing around on these pages, relating the fictional exploits of Quill Gordon, the fictional Caretaker of The Neverwas Nonesuch Angling Society, a fictional fly fishing club. A small, non-fictional lake has stood as visual proxy — an avatar of sorts — for the place known as Fish in a Barrel Pond and a small pencil sketch of a perplexed moustache has served as the avatar for Quill Gordon. That small lake shall remain unnamed, out of respect for the privacy of others, but most anyone with a search engine and a couple of minutes to spare can figure out of whose imagination Quill Gordon is a figment.

As the possessor of that imagination and as the newly former Caretaker of an old New England fly fishing club, I find myself living nearer the summit of Nonesuch Mountain, in the woods, at the end of the road, considering what comes next. With eleven seasons of All Anglers All the Time under my belt, I’m sure just the debriefing alone would hold some value to certain sectors of the fly fishing industry. Or, maybe, a memoir of sorts, like one of those early 20th Century explorers, returned from life among the cannibals?

I do know this: Just as surely as Rip Van Winkle bowled nine-pins with the crew of the Discovery and Sparse Grey Hackle was once yelled at and beat up by a trout, Fish in a Barrel Pond and the members of the Neverwas Nonesuch Angling Society are always just a jar of head cement thinner away.

Not exactly Brigadoon, but closer to it than we thought. 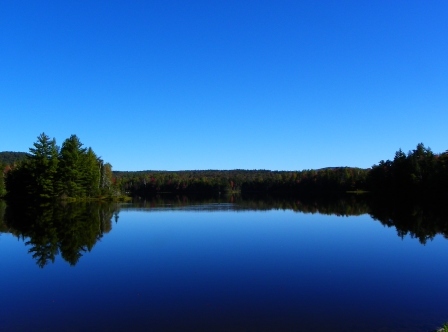