An Idea That Will Revolutionize Fly Fishing

Having at least a rudimentary command of fly fishing skills and knowledge, I have spent the last ten years in close observation and study of anglers and their ilk. One conclusion I have reached is that a vital segment of the fly fishing community remains chronically under-served. I aim to correct that situation and I do not want you to miss out on this Important Investment Opportunity!

According to this article by Kirk Deeter on Field & Stream‘s Fly Talk blog, the American Fly Fishing Trade Association estimates that, in the U.S. alone, close to 4.5 million of us fly fish at least once a year. As Kirk points out, some sources put the number higher, some lower, and some prefer to look at only those who are regular consumers of fly fishing products. With estimates as high as 10 million and as low as 1.5 million, we’ll stick with 4.5 million as a conservative average.

Obviously, a certain percentage of us fish more than just once or twice a season, in a wide range of weather and other conditions, and manage to have a fine time doing so. We find the time we spend outside, doing something we love, to be an invigorating balm for our souls.

But what about those others, the ones who don’t fish much at all because to do so would mean actually getting outside? The ones who constantly find it too hot, too cold, too rainy, or too windy. The ones who say they’d like to feel they were part of something larger than themselves, if only it weren’t made up of so many things smaller than themselves, like black flies and mosquitoes, spiders and mice. The ones who react with anger at otters and loons, and at the end of the day knock baby birds from their nests for pooping on the porch.

I have seen far too many fly fishing experiences absolutely, completely ruined by the great outdoors. Making allowances for, among other things, the fact that some anglers will struggle on their own for a week, or that an entire camp can be demoralized in a weekend, my observations lead me to believe that at least 25% of all fly fishers would fish a lot more if they didn’t have to do it outdoors.

Over a million anglers, for whom the traditional fly fishing experience holds little charm? Sounds to me like Oppotunity knocking and that’s why, working closely with the same folks who brought you Vermont Hand Crafted Tenkara Rods and our famous gear-for-guides Angler Management Device, I am pleased and proud to invite you in on the ground floor of our latest concept, Gordon’s Getaway Club®, the ultimate fly fishing destination for anglers who “expect less from Nature”™.

Just imagine, a fellow could stroll in his underwear with a drink in one hand, lazily roll-casting to lunker trout all day long if he wanted to. No sunburn or bug bites here!

And wouldn’t it make you feel better to know that guys like him would be there, at one of potentially hundreds of Gordon’s Getaway Club® franchises, instead of where you were planning to go? Invest in your own fishing future now!

Not everyone will be able to afford that sort of solitude. In fact, for many, warm feelings of friendship and closeness of spirit are among the most important aspects of fly fishing. In order to provide these benefits to as many anglers as possible, I envision the rehabilitation of already-existing under-utilized facilities, namely the popular-back-in-the-1970s Holiday Inn® Holidome®.

The first thing we do, let’s get rid of the golfers…

The elimination of putting greens and shuffleboard courts will not only benefit society as a whole, it will also allow for the expansion of fish-able water. Any number of configurations are possible with today’s modern pump and aquarium design technologies!

Conveniently located, along major Interstate highways, it will be nearly impossible to get lost on the way™ to Gordon’s Getaway Club®!

For every fly fisher who has battled the big, brawling rivers of the west or braved the black flies of Maine, there are a dozen Caspar Milquetoasts either too scared to try or gumming up the works for the rest of us. In the pleasant surroundings of Gordon’s Getaway Club®, even the most bashful angler will be able to lay into a real slab of a brown “just outside Jackson” or feel the tug of a football-size brookie “near Waterville”.

With careful planning and a good map, one might pick up a muskie “up around Mankato” or a bass “down close to Birmingham” or even a tarpon “right there in Hays, Kansas! Damnedest thing I ever saw,” on the way there. Each and every Gordon’s Getaway Club® will feature customization options to allow any fish to be caught anywhere.

Even better, not only will we allow it, we’ll guarantee it! Using proven conditioning methods, the fish stocked in the waters of each Gordon’s Getaway Club® will learn to strike an artificial fly just like wild fish do, and for the same reason: the fly resembles food! Or, in this case, the food resembles flies as we combine the latest 3-D printing technology, molecular food science techniques and animal nutrition know-how to produce pellets in a wide variety of shapes and in a range of colors. Dry flies, nymphs and streamers can all be duplicated with this process and look just like the real thing! 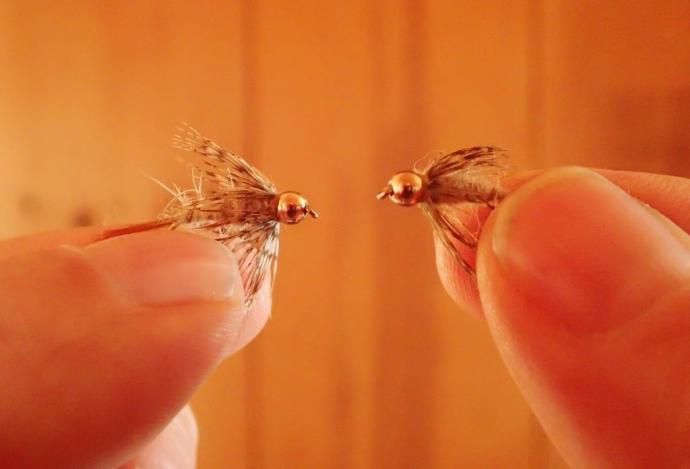 Our patented food pellet compared with a “real” fly. Fish can’t tell the difference, either!

Matching the hatch will be easier than ever at Gordon’s Getaway Club®. Members need only ask our staff of registered concierge professionals (formerly known as “guides”) which fly to use and get ready for action! Anglers won’t want to miss our Hare’s Ear Happy-Hour™, Pheasant Tail Friday™ or Rat Faced McDougal Monday™ promotions, as appropriately-shaped food pellets are discretely sprinkled from our patented over-head hatch dispensers, creating fish feeding frenzies that just can’t be beat.

With the hassles of nature and knowledge eliminated, members of Gordon’s Getaway Club® will be able to concentrate on more important things, like buying more gear and creating an entirely new Indoor Lifestyle market. Are you listening Orvis?

Members of Gordon’s Getaway Club® will appreciate the fact that a good cocktail will never be more than a short toddle away, just across the lobby, with fine dining available, 24/7, providing ample opportunities to impress others. And for those who normally find themselves too busy to fish, our state of the art wi-fi networks will ensure distractions for everyone.

There is plenty to be excited about here. Not only will Gordon’s Getaway Club® finally give over a million eager fly fishers a safe, nurturing place to practice their contemplative art in a clean, climate-controlled environment, it will reduce the pressure on many of our already crowded rivers and lakes. That in itself makes this a win-win proposition. And as anyone who has spent time on the water can tell you, there are those among us who would be better off staying indoors. With Gordon’s Getaway Club® they can!

*Fees expected to include a one-time, non-refundable, six-figure licensing fee for the use of Quill Gordon’s name and his Perplexed Moustache™ avatar image.

**Look for our ads in Golf Digest magazine featuring our New Member Putter Amnesty Program. Up to 50% off your membership when you turn in that bag of clubs!

7 thoughts on “An Idea That Will Revolutionize Fly Fishing”

This post is brought to you by the color Blaze Orange and by the number 4: A hunter from Fairfax was shot last week by a hunter from Bolton who thought he was a bear. That sentence could be read a couple of ways, I suppose, but the article I read went on to say the man was shot in Huntington. He was actually shot in the abdomen, but the point (besides "make damn sure you're aiming at what you think you're aiming at before you pull the trigger") is that neither man was wearing orange. Nothing says " I'm not a bear!" better than a hat, vest or jacket with blaze orange on it -- other than shouting it real loud -- and, personally, I have never been shot while wearing my vest. For goodness sake, people, be safe out there! Wear orange in the woods because not even the 56th four-leaf clover of the year is any good against a rifle or shotgun.
If looks could kill. White baneberry (Actaea pachypoda) has frothy white flowers that offer no clue what its fruit look like. Also called "dolls eyes," the berries are poisonous to humans but not birds, which spread the seeds. Dolls eyes are cardiogenic, causing cardiac arrest and, potentially, death. I've read that they taste terrible, so the chances of eating enough to die from are slim, but I'll pass. Don't see these often.
Mushrooms in moose poop and the place I saw a moose today.
I've always admired the ability of trees to grow in unusual places, no matter where they sprout. I also admire that they sometimes extend the same courtesy to others.
Life and death in the tomato house. Most hornworms, upon discovery, are "gently" "relocated" to places they'll be "happier." When one is found looking sickly, however, it is allowed to stay where it is because, chances are, its days are numbered. Tiny braconids wasps lay their eggs just under the skin of hornworms, where the larvae hatch and feed on the living caterpillar, weakening it. The larvae then emerge and spin cocoons on the caterpillar's body, become adults, and take up a life of feeding on nectar. The hornworm dies. More little wasps = fewer caterpillars.
Of course, you can always just say "I don't know" but 1) Each of a dragonfly's four wings has its own set of muscles and nerves, allowing it to operate independently of the others. 2&3) The leading edge of each wing has a dark pane called a pterostigma, which is structural feature, believed to act as a counterweight to help control flapping. 4) Each wing also features a nodus (upper left), which acts as a one-way hinge and increases wing flexibility.