(A new tab at the top of this page (or this link) will take you to a collection of photos and links following the production of maple syrup this spring from the sugar bush of some friends. Their new enterprise is called Bobo’s Mountain Sugar, and the taps are in on Bobo’s Mountain — all 2500 of them.)

The snow was deep when I started helping on the hill above the sugar house, but I waded and floundered and stomped my way along the lines, tapping trees for a few hours each afternoon, doing what I could. The steepness of the hill, combined with thickets of beech and short balsams, had me convinced I made the right call in leaving my snowshoes at home, even as more flakes fell every day. After struggling in the wake of an additional 14+” from one storm, I finally gave in and strapped them on the next day.

If, as they say, snowshoes make the impossible difficult, it was a very hard afternoon. Without my snowshoes I had sunk to my knees; with them I still sank to my knees and had to high-step to clear the holes I’d made, with the decks weighted down with snow. Lifting a leg, expecting 25 pounds of resistance but getting none because the snow slid off, resulted in a few sharp blows to my chin and twice I kneed myself in the ear when my right foot sank deeper as I lifted my left.

Onward I staggered, drilling holes, inserting taps and connecting lines. Up the hill to the end of one line, across the hill to the next, and down again, I slipped off hidden rocks and tripped over the tops of small trees. Once, I fell, backwards, but the pull of gravity was no match for the boulder I managed to grab with my butt, and I did not slide down the slope. Kicking and thrashing, with a backstroke I dug myself deeper, eventually getting my feet so far above my head that a well-executed somersault was all that was needed to right myself. My somersaults, however, score much better on style points than execution and after another 10 minutes I was back on my feet, in the middle of a wide crater, breathing the tangy scent of mangled young hemlocks.

Plunging ahead, I used my not inconsiderable size to my advantage and plowed my way down the run to the last tree on the line. Watching the first drops of sap drip into the tube I’d just connected, I took a step back to admire my work, but just for a second, because the tail of my right snowshoe dug in and I spun around, sticking my left snowshoe between two small beeches, throwing myself into one of the niftiest figure-4 leg-locks ever, from which I admired the sky.

My left hand was behind my right ear and I lay on my right elbow. Twisting in an effort to extract myself, I slipped back against the tree I’d just tapped, completing the arm-bar that brought my day to an end and I tapped out. Outmatched by gravity and deep snow, I gave up and made my way down to the sugar house, mostly by flopping along on my belly like a walrus.

As with so many other activities, I suspect there is an “extreme” version of tree tapping where the participants are the right size for the job (small and light), wear brightly colored spandex and streamlined helmets as they zip from tree to tree, skimming over the snow on tiny snowshoes, barely making a dent as they go.  Somehow that amuses me just as much as a gigantic wad of flannel and wet wool flopping across a side hill.

Smaller, more nimble tappers finished what I could not, so all the taps are in on Bobo’s Mountain and now we wait. More snow is falling as this is written but by the weekend there should be sun and mild temperatures to trigger the first strong runs of sap and the boiling can begin. 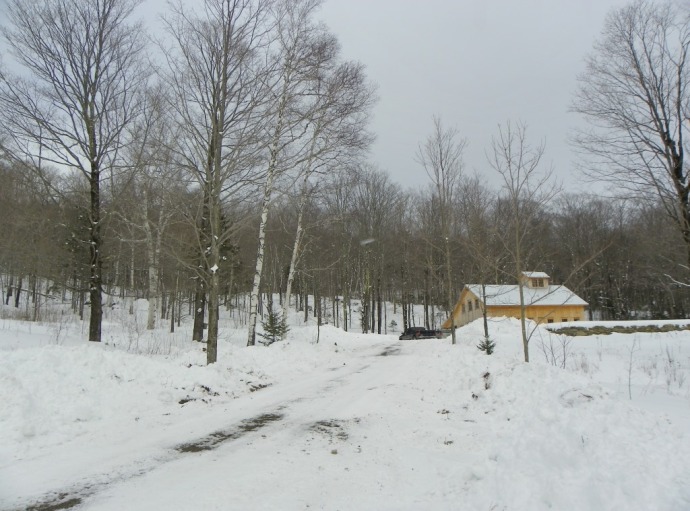 11 thoughts on “Tapping Out”

I posted a black square the other night, as an artsy expression of angst over what is happening in America. I did not know about Blackout Tuesday. I certainly support the sentiment but my participation was inadvertent and my black square became just one among millions. Unless there's something going on I don't know about, tonight I post a square that is yellow -- the color of liars, scoundrels, and cowards who hide in the basement when the People Assemble for Redress of Grievances. #notaboutpoliticsanymore #stopbeingadick #trumpisnotlincoln #trumpisalooter #shortfingeredvulgarian #pleaseresign #getoutnow #blacklivesmatter #endracism #maga #trump2020 #firstamendment #whatssofunnyaboutpeaceloveandunderstanding
The woods are filling in and shorter days are less than a month away. #vermont #spring #sunset #longevenings #quillgordonvt #westonvt
5/19/2020
Silence is not the absence of sound; it is the absence of noise. #vermont #isolation #quiet
Someone had a robin for breakfast... #feathers #robin #hawk #naturedoesntcare #everyonehastoeat