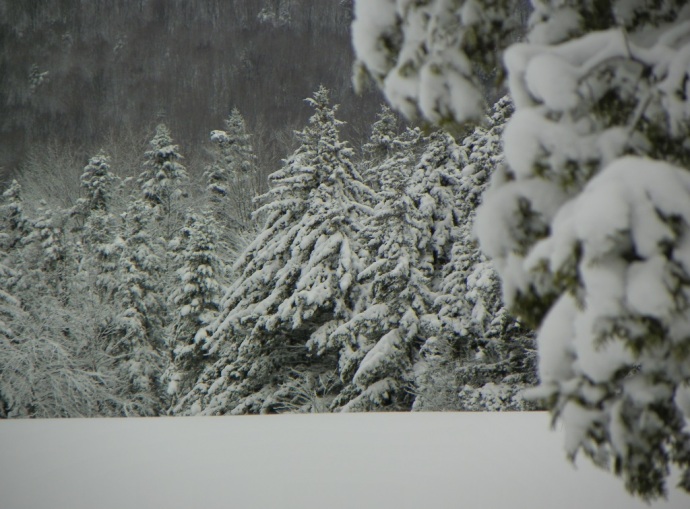 While The Weather Channel had St. Louis and Chicago in a tizzy over “Ricky” or whatever name they gave the latest mid-west storm, an unnamed cell dumped close to a foot and a half of heavy wet snow in this neck of the woods. Just a few miles away there is next to no sign of this storm so there’s really no point in giving it a name, although you can bet a few people are calling it something. 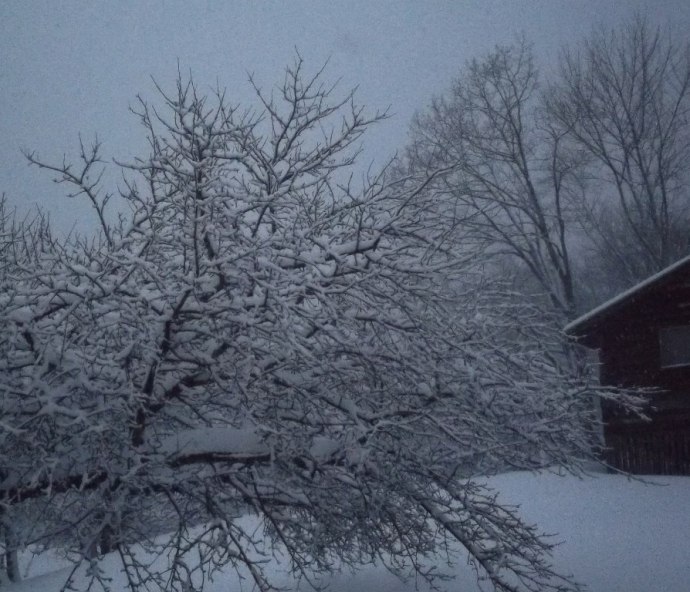 It was kind of pretty, though, as dusk fell and the night turned blue. Yesterday morning, all was silence. 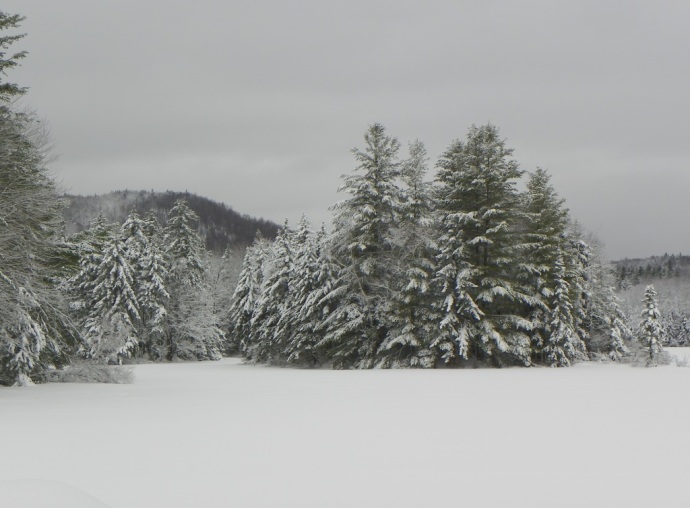 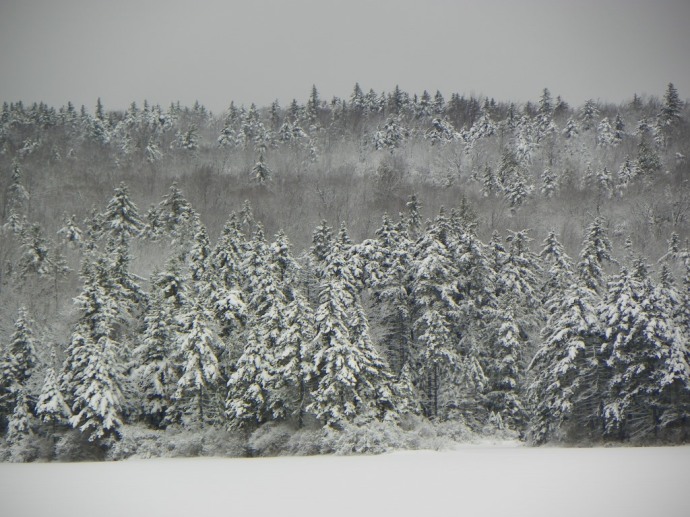 It was another nice day to live in Vermont.

But all that loveliness weighs heavy on old buildings and it wasn’t long before the Agency of Agriculture issued an advisory regarding the potential collapse of roofs under all that wet snow, especially the roofs of old, unheated buildings like the camps at Fish in a Barrel Pond. Here, and all over New England, the time-honored tool for pulling snow off roofs is the roof rake. 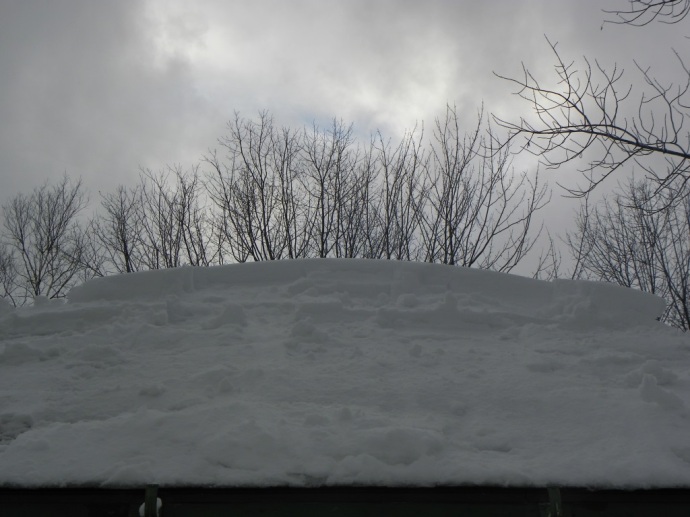 Wet clumps of snow thudded down as I hacked at the drifts, not just to lessen the load but to at least even it out, and after twice around the building on snow shoes I still sank above my knees when I kicked them off.

Rough shingles hold snow more than smooth metal which sheds its loads more easily. Whether I pull it down or it comes down on its own the snow piles up, sometimes in inconvenient places. 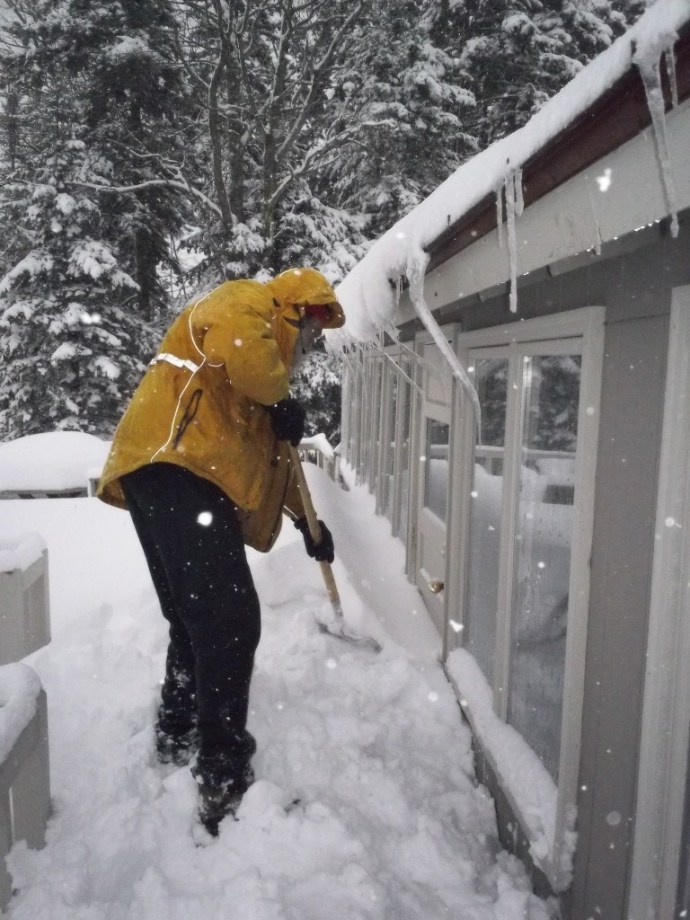 The coldest part of the year is over and winter is on its way out. It may not be quite done with us just yet but the tide has turned and daytime temperatures have been at or just above freezing. A few more degrees during the days (along with sharply colder temperatures at night) and the sap will really start flowing, but for now the new snow is a mixed blessing. It may hold back the first big run, buying a couple more days to finish tapping the trees, but it makes for slow going near the rocky top of the hill where the maples are surrounded by thickets of beech. 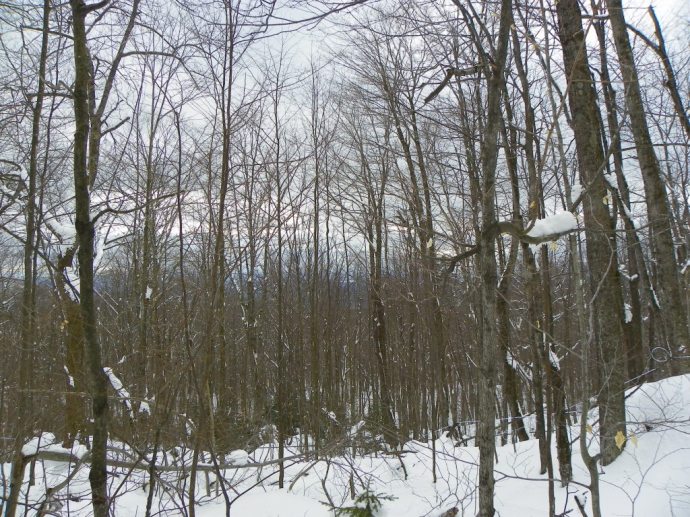 Opting against snow shoes this afternoon, I blundered and wallowed my way along the lines, sinking to my waist in spots and dancing along fallen trunks in others. At least my arms gyrated wildly and my legs churned madly, so if someone had asked how I wound up at the bottom of a four-foot snow hole I would have told them I was dancing.

There was reason to dance a little at the warmest part of the day, just before the clouds came back in and the wind picked up. The hard icy crust of a week ago was gone, it felt like the whole forest relaxed in the mildness and even the sharp, pinging rap of taps going in went perceptibly softer. With the end of tapping in sight (Monday if all goes well) and the sugar house nearly ready, the first sap has begun to drip. 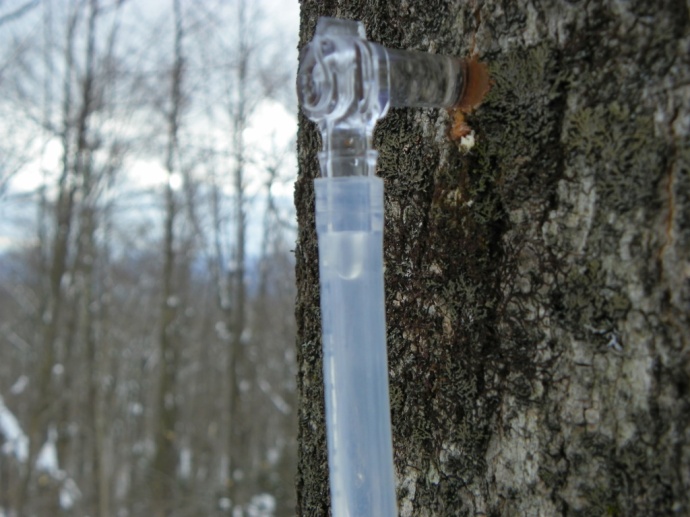 Another nice day to live in Vermont.

14 thoughts on “Another Nice Day to Live in Vermont”