Water boils at 212°F, syrup at 219. My job this week was to achieve and maintain a constant 219 degrees in the sap pan, using a wood fire for heat. In searching these pages for photos of fire and me, I came across my post The Cremation of MMX and the photo below. I would like to reassure readers (especially Skye and Tina, whose sugar house I have not burned down) that the man in the foreground had no hair to begin with and was fine. 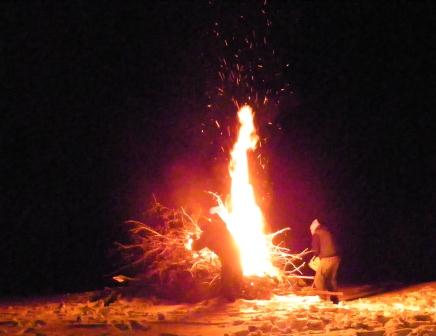 The fire in this post was of a completely different nature.

Still thin and watery, 500 gallons of “concentrate” sat in the storage tank above the control room in the sugar house on Bobo’s Mountain, the result of a few days of light runs. The collection tank outside was filling fast and would need to be emptied soon so the plan was to boil until there was room enough to turn on the reverse osmosis and  continue boiling as the outside tank emptied to get ahead of the run.

From the storage tank , cold sap flows into the upper pan of the evaporator, where it heats up. Clouds of steam pass through the forward stack and leave through openings in the cupola, while a stream of outside air condenses the rest into hot distilled water that drains out the back and is used for clean up and washing. All told, the Steam Away unit can remove up to 150 gallons of water per hour.

As the sap loses water it becomes more dense and begins to move through large channels in the pan,  eventually dropping into the lower pan, which also has channels, each filled with sap of progressing densities. Some important scientific principle is behind this sorting of densities, involving things like “physics” and “chemistry” but I passed out before it was fully explained to me in equation form, leaving intact my belief that a good part of syrup production also involves “magic”.

But my job was not to decipher molecular wonders and fluid dynamics. My job was to stoke the fire and maintain the 219 degrees needed for syrup. By the time the sap reached the final channel of the third pan it was much changed from when it had begun its journey hours before.

Darker and thicker, it dripped luxuriously when lifted and samples were drawn. With proper temperature and density achieved, a trickle of syrup was released. Checking often allowed the flow to be stopped as soon as unfinished product began to emerge. 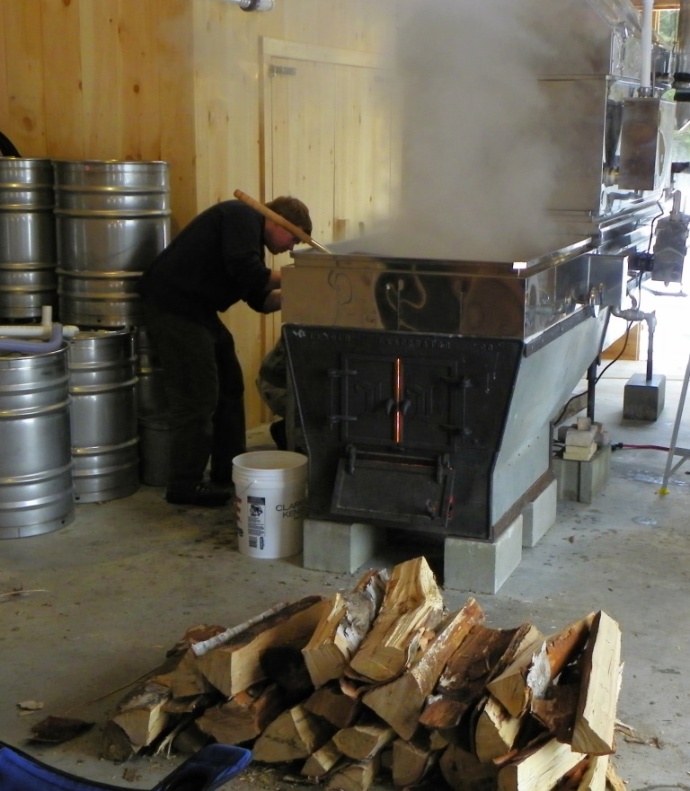 From early morning (as soon as pipes and lines were thawed from the cold night before) until early evening the fire was stoked. Opening one door and stoking one side at a time kept the draft going so I alternated from left to right, at three to five minute intervals, watching the position of the flames and adjusting accordingly to keep the boil even and avoid hot spots that could ruin both the syrup and the finishing pan. The bottom of the pan turned out to not be the only place hot spots could form and for a very brief while in the late afternoon the left side door glowed, pulsating like an angry cuttlefish.

I am not the only person to heat a firebox door to cherry red but it’s not good for the cast iron. Rearranging the fire brought things back under control with no temperature loss in the pan and the boil continued unabated.

New sap entered the system as finished syrup found the egress. Each draw brought anywhere from a quart to a couple of gallons of scalding hot sweetness, which was then pumped through a filter press which uses diatomaceous earth to strain out any impurities, usually minerals, also known as “maple sand” or as some folks call it, “the good stuff”. Gritty and dark, most people don’t miss it at all.

Those jars up there are what I’m calling the “Stoker’s Draw”. Yes, I will work for syrup.

The barrel those jars sit on was filled at the end of the day, 40 gallons of pure dark amber Vermont Maple Syrup put away to be run through the canner and packaged later. The old rule of thumb (also known as the answer to stop the questions) is that it takes 40 gallons of sap to make one gallon of syrup but that assumes certain things, like a relatively high starting sugar content in the sap. This run was relatively low in sugar and took more sap than that. Without the aid of reverse osmosis and the silver monster of a Steam Away who knows how long this boil would have taken; as it was, we boiled for close to seven hours.

A cold spell this weekend has shut down the sap run for a few days, with heavy flow expected by Tuesday or so. This was a successful first run for Bobo’s Mountain Sugar, making syrup on such a scale, and everyone learned a lot as we went. Three boils have produced more than 100 gallons of syrup so far but this past week was just a warm up for the frantic daily boils to come.

Among the things I learned this week are that making syrup is a dangerous activity. Hot fire, hot metal, scalding steam and boiling syrup really keep a person on their toes. I also learned that, between the intense heat and general stickiness, a sugar house is no place to wear fleece, and it’s a good thing we’re just a few days from my annual spring shearing because I’m not sure my full beard will survive the conditions. I suppose I could boil it down to recover the sugar …

For more about the sugaring season on Bobo’s Mountain, click on the “Vermont Maple” tab above,

#thelogger #rustydewees #macktruck #boots
You might recognize him as "Dave Randall" from Law & Order, S7E11, but most people know @rusty.dewees as "The Logger". If you don't know him yet, check him out. People from places other than Vermont are smart enough to get his stuff. Today he did a free show in Weston, sponsored by @vermontcountrystore . The audience was small so, instead of performing on the flatbed of his big Mack truck, he came right out onto the green to tell stories and jokes, sing and play guitar. He was pretty good and it was all I could do to not laugh out loud.
Pulled the garlic!
Testing all those knots I tied in the tomato tunnel at Quoyburray Farm.
Honeybees in a poppy.
A humble bumble.