So there I was, sitting on the dam with a cup of coffee, watching the ice melt and searching for signs of spring when I saw something swimming in the open water along the west shore. It ducked beneath the ice before I could focus on it but a moment later it surfaced less than 20 feet away and I could see it was a young beaver, striking out on its own, looking for a place to set up shop.

I watched as it followed the shoreline, working its way through the ice floes and, as it swam along the east shore of Fish in a Barrel Pond, I had a feeling I knew exactly where it was headed. My suspicions were confirmed the next morning.

Last spring, with some help from the state, I installed a “beaver baffle”  in a dam along one of the roads I maintain. You can read about it HERE. The baffle allows water to flow through the beaver dam and the theory is that the beavers will never figure out that they are losing water through the large pipe twenty feet back from the dam. It worked well and the water level stayed where I wanted it but then the resident beavers got ambitious and began expanding their empire into territory strictly off-limits to beavers. If only they had stayed where they were. 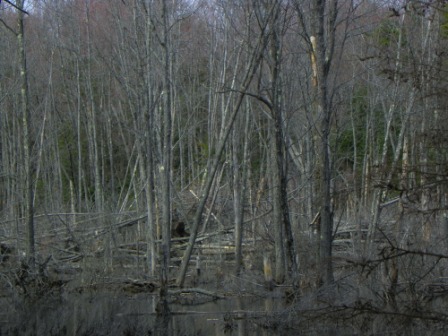 Their removal worked out pretty well for this new, young beaver. He (we’re assuming it’s a he) turned the corner, followed the outlet of the pond and wound up in what must seem to be a beaver paradise. The little guy doesn’t have to do a thing! There’s already a dam in place, an abandoned lodge, and there are several stashes of food his predecessors never got back to. What luck!

The thing about beavers, though, is that they can’t just sit there and enjoy what they have. They must work, work, work, and this particular beaver is no exception. It didn’t take him long to start “improving” what he’d found. Scooping, digging and pushing, he has undertaken an expansion of the dam which, with the baffle in place, would normally not be a problem. 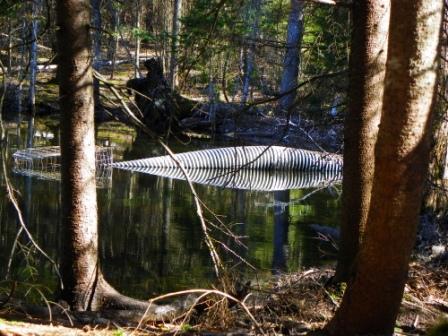 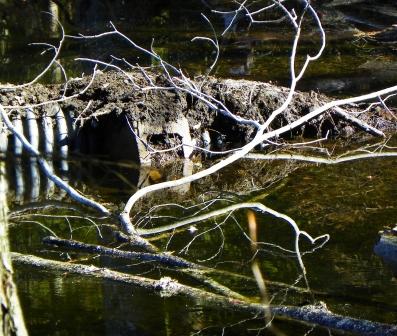 One thought on “Looking for Trouble”