Stepping Out in Style (plus a little music)

Regular readers of these pages know how dedicated I am to style, as well as the dignity and respect with which I treat the subject. In fact, in 2013, an entire Flashback Friday post was dedicated to style — the appropriately titled Style Issue. Since then, we’ve covered style from head to toe, with posts about hats, men’s outfits, and even shoes, all with the seriousness such subjects deserve and the gravitas readers have come to expect from me.

The inspiration for today’s post comes from the pages of The New Yorker‘s recent Spring Style Issue — specifically, the third page in. 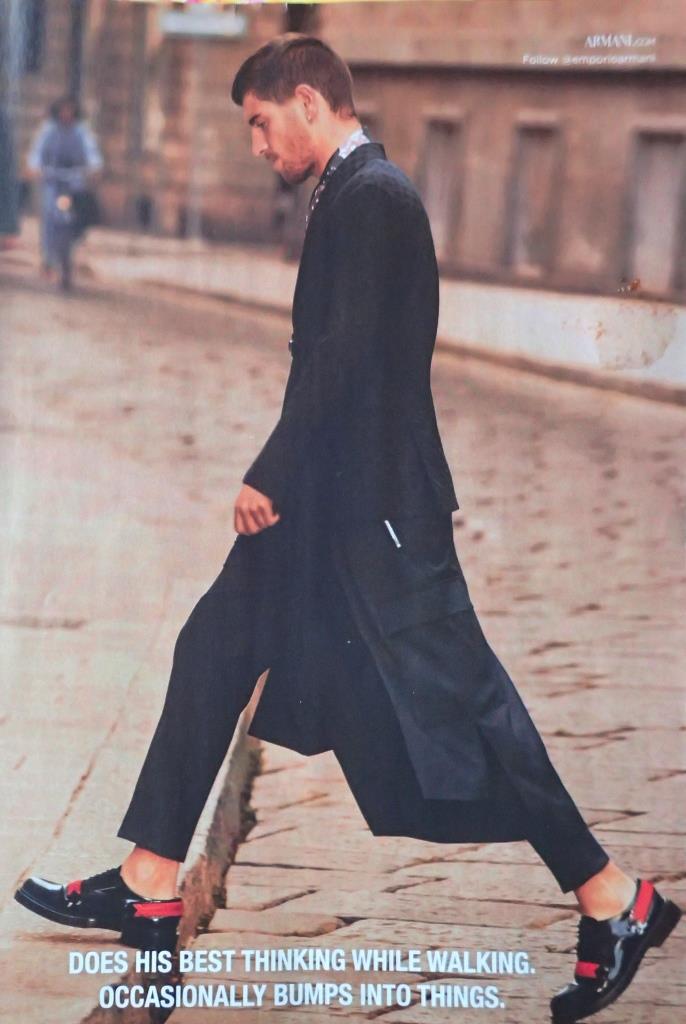 I have grown used to not being in a target demographic when it comes to such ad campaigns, and it’s probably just as well. The handsome young man in that Armani ad is wearing lovely shoes but I am struck by several things when I look at it. First, there is a smudge on the right side of the page. It’s barbecue sauce and, for that, I apologize. Second, that man’s britches seem a little short to me and, around here, anyone with pants that short and not wearing socks is bound to pick up ticks. Third, those shoes look expensive and I shudder to think what even a mild case of plantar hyperhidrosis might do to the silk linings. Talk about smelly dogs!

Things might be different if I lived in Rome, but those are definitely not the shoes for me or, for that matter, anyone else I know. I live in Vermont and, curious to see what kinds of fashionistas I’ve been consorting with, I set out with my camera last Saturday to record some of the fancy footwear I came across. Okay, I didn’t set out anywhere; I spent half the day and all damn night in a sugarhouse and took pictures of people’s shoes as they came through. 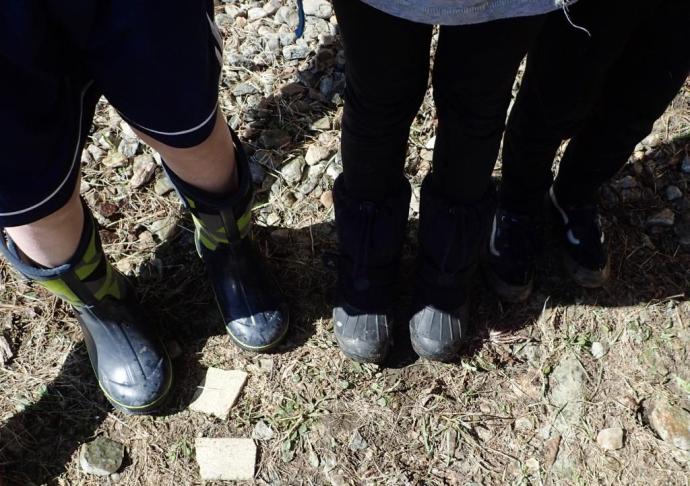 Shoes, but only because someone made them wear something.

Boots make sense this time of year but I know those children. Their feet are covered only under protest. I also have a feeling socks weren’t part of the deal, either.

Easy on, easy off.

A gently worn Carhartt barn coat is the pinnacle of style around here, especially with something you can kick off and slip on easily. For some, laces are superfluous. 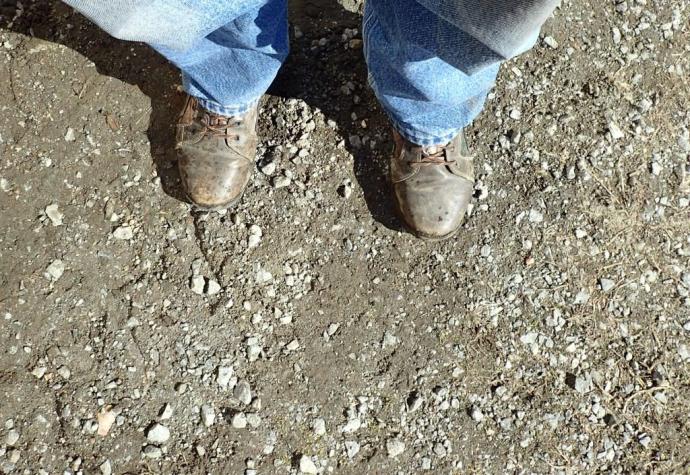 When an angry mom tells you to stop taking pictures of her child’s feet, do so immediately and take a picture of your own. Those boots are laced tight precisely so they don’t slip off, especially as a hot iron door swings open.

Basic black is always in style.

If the shoes worn by the model in that Armani ad were to get dirty or, heaven forbid, scuffed, there would surely be a very expensive leather emergency and perhaps even some crying. As long as they aren’t too deeply gashed, most of the shoes I came across last Saturday can simply be hosed off if the dirt is bothersome.

Ready for working, dancing, or just standing around.

Even late at night, when the Beautiful People flit about, the footwear didn’t change much, proving that day-time classics work just as well in the evening. 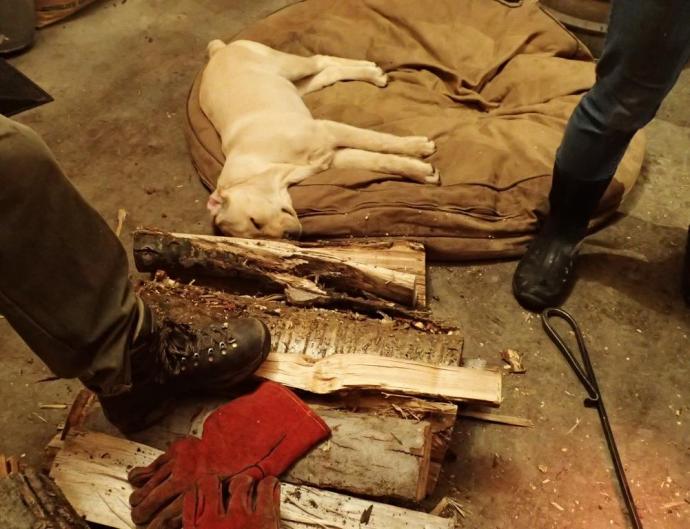 I’m not the only person I know in Vermont with a subscription to The New Yorker but, when it comes to fashion and style, we are a very underserved demographic. I hope magazine editors and “influencers” will see this and make some effort to include some maple chic in their next campaign. The real kind, just like our syrup; not that corny catalog stuff.

Meanwhile, we’re working on a food issue for those with especially refined palates.

Cover spread for the Food Issue

Now for some music.

It’s not every day that an old shuttle van with Kansas plates slogs through the mud and up the hill to the sugarhouse, but just such a thing happened last weekend. The occupants of that van were not a bunch of senior citizens out for a joy ride or a church group on a lark, no sir. Instead, it was Carrie Nation and the Speakeasy, a band from Wichita, Kansas, on their way to do a show down the road at Magic Mountain.

Carrie Nation and the Speakeasy

With an eclectic sound that has been described as “a stagecoach in overdrive”, they blend bluegrass and brass with ska, punk and dixieland, at times even sounding like Tom Waits doing klezmer. After a few maple dogs and distilled beverages, they played a couple of songs as the syrup boiled, turning a good Saturday afternoon into a great one. It was enough to make us wish the sap wasn’t running so we could take the night off to go see their show. Carrie Nation and the Speakeasy is on tour through June; clicking the link to their website will take you to their schedule.

I’ve shared a video of them at Bobo’s Mountain Sugar on my Quill Gordon Facebook Page and here’s a video from the show they did that night. Enjoy. I’m pretty sure they weren’t wearing Armani, either.

3 thoughts on “Stepping Out in Style (plus a little music)”

I posted a black square the other night, as an artsy expression of angst over what is happening in America. I did not know about Blackout Tuesday. I certainly support the sentiment but my participation was inadvertent and my black square became just one among millions. Unless there's something going on I don't know about, tonight I post a square that is yellow -- the color of liars, scoundrels, and cowards who hide in the basement when the People Assemble for Redress of Grievances. #notaboutpoliticsanymore #stopbeingadick #trumpisnotlincoln #trumpisalooter #shortfingeredvulgarian #pleaseresign #getoutnow #blacklivesmatter #endracism #maga #trump2020 #firstamendment #whatssofunnyaboutpeaceloveandunderstanding
The woods are filling in and shorter days are less than a month away. #vermont #spring #sunset #longevenings #quillgordonvt #westonvt
5/19/2020
Silence is not the absence of sound; it is the absence of noise. #vermont #isolation #quiet
Someone had a robin for breakfast... #feathers #robin #hawk #naturedoesntcare #everyonehastoeat