As if surviving at the bottom of a lake or stream, passing through two dozen or more life stages (instars), shedding their skin each time wasn’t enough, mayfly nymphs eventually rise to the surface and shed their skin one last time, emerging as winged adults. Having dodged all manner of fishes on the way, they breathe air for the first time and then fly off into it, also for the first time. Bypassing the traditional insect pupal stage, one morning a nymph is eating algae off a sunken log and that evening it’s flying for its life, trying to get to a bush or a tree before the birds and the bats can get it.

I wonder if mayfly nymphs realize what’s coming and how their lives will change. Would they do anything different?

Mayflies rest and get their bearings after their initial, panicky flight. One might think they’d be hungry after all they’ve been through, but it just doesn’t matter; they have no working mouth parts and couldn’t eat if they wanted to.

Even after a complete change of form and relocation to another world, mayflies are still not mature. They shed their skin one more time, trading their dull, lightly fringed wings for shiny ones that sparkle like crystal, sometimes changing the color of their bodies, even to the point of becoming nearly transparent. Plus, their sex organs function! All grown up and decked out in new duds, now it’s time to get it on.

The long front legs of male mayflies are useless for walking, which a mayfly doesn’t do much of, anyway. Their purpose, or at least the use to which they are put, is to grab a female — any female — mid-flight, in order to mate with her. Some liken mayflies to faeries and call what they’re doing “making love” but it’s a quick, business-like affair, with hardly a handshake let alone a cigarette afterward.

I wonder if some mayflies, disappointed when their first time wasn’t what they’d hoped for, realize it was also their only time and get even more disappointed.

Spent, adult mayflies settle to the surface and die, having mated so others of their kind will live and feeding a little bit of everything else with their carcasses. I wonder if they realize that the moment was all there was?

While allowing myself the luxury of imagining the musings of mayflies, I wonder what philosophical dilemmas (if any) are presented to those who don’t get to continue their kind. The ones that are snatched up by fish and birds and bats probably never see it coming and don’t have a chance to think even Oh shit before the light goes out but there are other hazards waiting for mayflies who are out in the world for the first and last time.

The eaves of buildings can be convenient way stations for newly “hatched” mayflies. It’s one of the “secret” ways I seem to usually know what the trout might take. Their shed skins collect all season long. 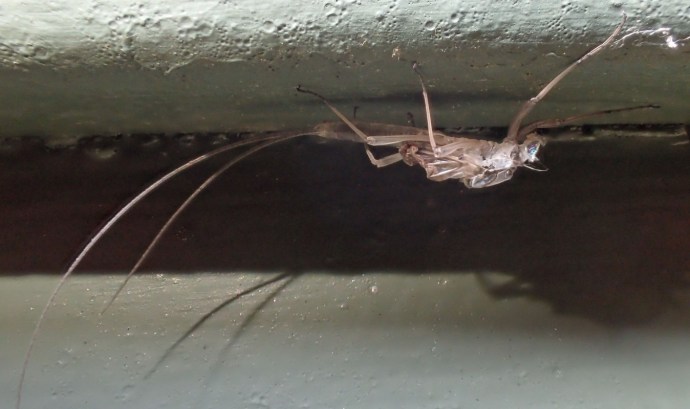 Made it this far.

The eaves of buildings are also convenient places for spiders to set up shop and, directly below the shed skin above, we found a mayfly who was going no further. 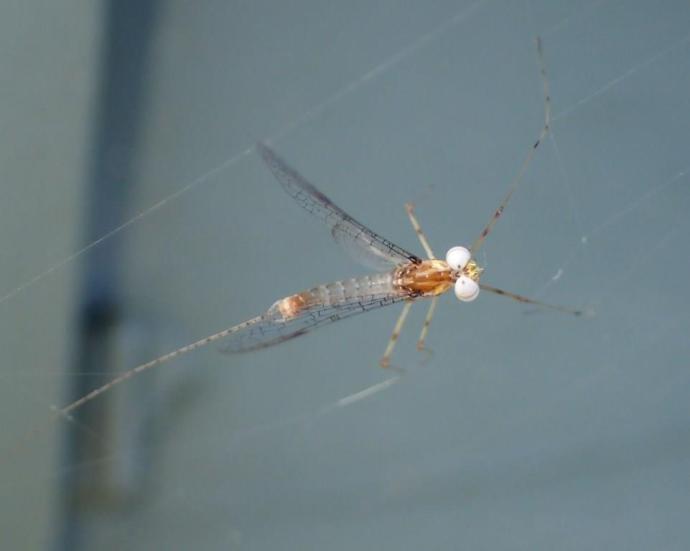 All that for this?

Even Houdini couldn’t get out of the trap just around the corner. Caught as a newly-minted dun, this mayfly went into its final shed only to crawl into more sticky web.

I wonder if they realize what’s happening, but with no previous experience of any kind against which to frame it, probably not. It is what it is, living in the moment, where everything is as good as it gets.

I yam what I yam

Benjamin Franklin also pondered the musings of mayflies and related a soliloquy he’d heard one give in a letter he wrote in 1778, titled The Ephemera.

One thought on “That’s All?”