“Some are born anglers; others have anglers thrust upon them.”

“Some are born anglers; others have anglers thrust upon them.” ~Quill Gordon

The summer season is upon us and millions of people are hatching plans for a little recreation, adventure, and a chance to be closer to nature. The View from Fish in a Barrel Pond is dedicated to those who work hard so they can play hard in the Great Outdoors but it is especially dedicated to those who take care of them when they get there.

To everyone who works hard so others can play hard (or at least pretend to), here’s to you.

Here’s to getting paid to watch other folks fish and the chance to see an eagle wheeling across the sun. Here’s to sunsets and birds and the things other people know simply as “trees”. Here’s to the rhythms and cycles felt only by tuning in every day and the thousand tiny moments that accumulate, crystallizing into wonder. To rain and thunder and blustery winds, to days so calm they stand out, and to the quiet that settles in when no one’s around.

To the soil and the dirt. To the rodents, arachnids and insects, and to meteorological phenomena beyond our control.

Living and working in the midst of what others seek can make it harder to see but it’s still there, and here’s to everyone who makes it possible for others to catch even a glimpse. 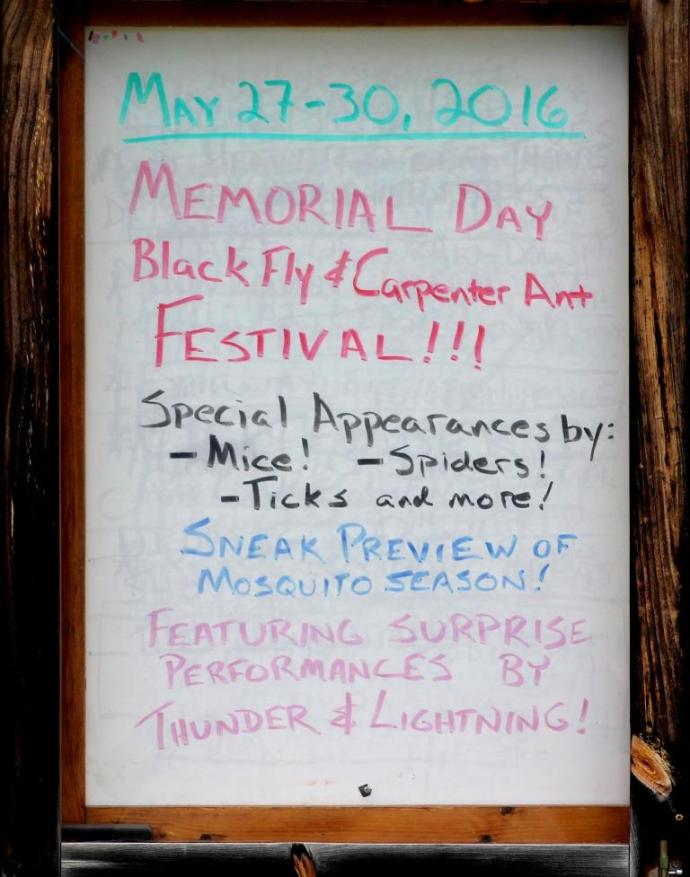 In 2012, according to the Outdoor Industry Association, more than 140 million Americans said outdoor recreation was a priority in their lives and they spent close to 650 billion dollars to prove it.

The U.S. outdoor recreation economy accounts for more than six million jobs. Quill Gordon’s was once again not included in any list of the Best Fly Fishing Jobs for 2016.

See also: A Toast to the Unknown Guide

This post is brought to you by the color Blaze Orange and by the number 4: A hunter from Fairfax was shot last week by a hunter from Bolton who thought he was a bear. That sentence could be read a couple of ways, I suppose, but the article I read went on to say the man was shot in Huntington. He was actually shot in the abdomen, but the point (besides "make damn sure you're aiming at what you think you're aiming at before you pull the trigger") is that neither man was wearing orange. Nothing says " I'm not a bear!" better than a hat, vest or jacket with blaze orange on it -- other than shouting it real loud -- and, personally, I have never been shot while wearing my vest. For goodness sake, people, be safe out there! Wear orange in the woods because not even the 56th four-leaf clover of the year is any good against a rifle or shotgun.
If looks could kill. White baneberry (Actaea pachypoda) has frothy white flowers that offer no clue what its fruit look like. Also called "dolls eyes," the berries are poisonous to humans but not birds, which spread the seeds. Dolls eyes are cardiogenic, causing cardiac arrest and, potentially, death. I've read that they taste terrible, so the chances of eating enough to die from are slim, but I'll pass. Don't see these often.
Mushrooms in moose poop and the place I saw a moose today.
I've always admired the ability of trees to grow in unusual places, no matter where they sprout. I also admire that they sometimes extend the same courtesy to others.
Life and death in the tomato house. Most hornworms, upon discovery, are "gently" "relocated" to places they'll be "happier." When one is found looking sickly, however, it is allowed to stay where it is because, chances are, its days are numbered. Tiny braconids wasps lay their eggs just under the skin of hornworms, where the larvae hatch and feed on the living caterpillar, weakening it. The larvae then emerge and spin cocoons on the caterpillar's body, become adults, and take up a life of feeding on nectar. The hornworm dies. More little wasps = fewer caterpillars.
Of course, you can always just say "I don't know" but 1) Each of a dragonfly's four wings has its own set of muscles and nerves, allowing it to operate independently of the others. 2&3) The leading edge of each wing has a dark pane called a pterostigma, which is structural feature, believed to act as a counterweight to help control flapping. 4) Each wing also features a nodus (upper left), which acts as a one-way hinge and increases wing flexibility.