What’s Wrong With This Picture?

Maybe the resolution ain’t so great, due to cropping and zooming, and maybe the white balance is off a bit, but I don’t think there’s a whole lot really wrong with that picture. It’s an osprey against a clear blue sky on a lovely late summer day and most people wouldn’t find anything wrong with that.

“Now, wait just a darn minute, Quill,” some people are shouting right about now. “That’s an osprey! It’s going to eat all the fish! Someone should do something!”

Perhaps those people would find this picture more to their liking:

Thank goodness for sportsmen like Jack! Imagine how many fish were saved! Just look at the size of that thing! Pluck the feathers off the wings and it’s almost the size of a small chicken!

Must have been a very challenging shot, too, what with the osprey’s slow flight and habit of hovering.

That’ll teach it to eat fish.

People still shoot ospreys today — whether to “protect” fish or just to be shootin’ stuff — facing hefty fines and prison time if caught. I’ve seen people reflexively shoulder imaginary guns and squeeze off a few shots when an osprey came near and I’ve had people tell me I’d better get my real gun and shoot them myself before they eat all the fish.

Somehow, despite all of my not shooting the ospreys, the lake always still has fish in it by the time the ospreys have begun their migration to Central and South America in the fall.

An adult osprey, sometimes a pair, usually makes an appearance over Fish in a Barrel Pond in early spring, shortly after ice-out. Throughout the nesting season I see them from time to time, hunting for trout to take back to their chick(s), but there are days I don’t see them at all, leading me to believe their nest is some distance away and other lakes and ponds are included on their rounds.

Things get interesting toward the end of summer, though, when the ospreys bring a youngster to Fish in a Barrel Pond for training. Even the most self-sufficient adult misses more fish than it catches, expending tremendous amounts of energy hovering, crashing into the water and struggling to get airborne again while the chick sits patiently in a nearby tree, watching and learning. Over the course of a few days, the adult will move on from delivering fish to the chick where it sits to dropping fish in the water for the chick to pick up on its own. Only able to eat a couple of fish each day, the osprey’s lessons progress slowly, but it must learn quickly or starve.

The loons are teaching their chick(s) to survive at the same time, and one of their lessons is that, if a fish drops from the sky, go pick it up. This then allows the young osprey to learn that a loon will leave a fish behind if it has to dive for its life but it may also come back for that fish and your ass better be out of the water when it does.

Lessons abound for both osprey and loon when the eagle shows up. Not only does a bald eagle find loon chicks exceptionally enticing, it finds the fishing is especially easy when you let everyone else do the work. The loons steal from the ospreys, the ospreys steal from the loons, and the eagle steals from all of them.

I once watched an osprey drop a trout, which was picked up by loon and abandoned to avoid a pass by an eagle. Another osprey dove for the fish but had to leave it behind as it flapped along in the water, under attack by a second loon. The eagle circled back, picked up the fish and headed for the hills with the first osprey on its tail. In the midst of an evasive maneuver, the eagle lost the fish, which crashed through the trees to the forest floor. Five exhausted, panicked birds, all of them hungry, and somewhere out in the woods a very happy mink.

One of those guys who’s always pretending to shoot stuff told me there was a dead bird in the water in Green Damselfly Cove a couple of years ago and, even though I hadn’t heard gunshots, I had to wonder. Being the kind of guy I am, I retrieved the carcass and turned it over to the Game Warden, who agreed to stand still and lend my pictures of a dead osprey a little more credibility than old Jack’s up there. 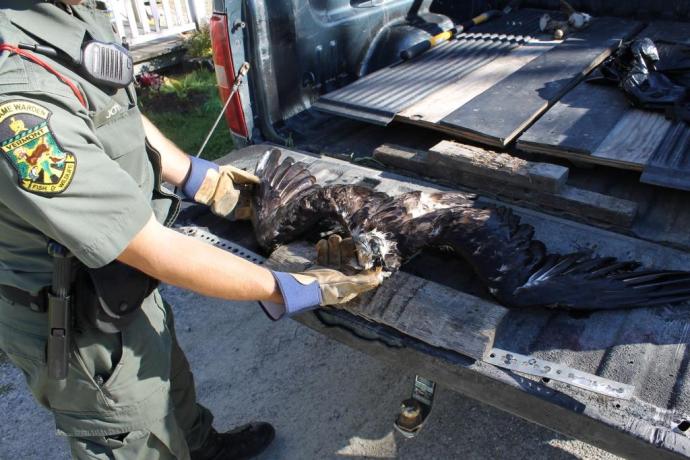 With no bullet holes and only one obvious injury, the bird in question turned out to be a young osprey that hadn’t been very good at it. Harassed by an eagle for nearly a week, its parents had cleared out and I’d seen it dropping the few fish it caught. There’s not much to an osprey, even when robust, but this one was hardly there. It had clearly failed to thrive.

This osprey was missing the sheath from one talon on its left foot — akin to you or I ripping out a toenail. No wonder it was dropping fish. With the eagle’s constant bothering and stealing, this osprey starved to death …

Before it could eat all the fish.

3 thoughts on “What’s Wrong With This Picture?”

The barn. Farm stand coming soon!
Sheep, waiting to hit the pasture. Roasts, chops, shanks, sausage, and lots of really nice yarn on the hoof.
Tomatoes in the greenhouse, waiting to hit the tunnel...
The mighty broadfork and my good hat.
The cover for the tomato house arrived this morning so, since someone already brought in 72 wheelbarrow loads of compost this weekend, getting the planting beds in order seemed like the thing to do. 1) a nice morning to spread piles; 2) greensand and limestone in the rain; 3) after the mighty broadfork.
Here's a little tip: if you come across someone teasing nettle roots from a garden bed, they probably already know all about nettle tea and other uses for nettles. If you can't help yourself, though, and need to share, be prepared to receive a short and very creative list of things *you* can do with nettles!