It certainly has been an unusual year, and it all started when my friend Eugene (see Careful with that Axe, Eugene) told me of a fish he had seen. Even allowing for his usual inflation percentages I had a hard time believing him when he described its immense size. Certain that between the two of us we could catch any fish that ever swam, I went along with his plan to hook this behemoth, hoping at least to prove the outrageous nature of his exaggeration.

Only one bait would do for a fish such as the one Eugene described and I knew it was best to gather such bait early, before the warmth of the sun made them active and more difficult to subdue. Starting at noon was certainly not to our advantage but it was good sport nonetheless and it wasn’t long before we had a good supply.

With our eight grasshopper limit in the bag, there was plenty of good light left for fishing so we headed to the water where Eugene had seen his fish. Seven of those grasshoppers were taken by dinks — nowhere near the size of the fish we were after — and it was with some trepidation that we cast number eight into the swirling current. I was in no mood to spend another afternoon chasing grasshoppers all over hell and gone, trying to get off a shot and then lugging the buggers back home, so I spit on it for luck before making the cast.

A dark shape appeared and faded, indeed it seemed the whole river bottom shifted, and I was ready for some serious action, but a smaller fish darted from behind a rock and took the bait before our monster could strike. It was not the battle I had hoped for but the fish did the best it could and it took a couple of tries to bring it to net. Disappointed that we did not catch the big one that day, we kept the fair-sized fish we caught with our last grasshopper and made a tasty snack of it to go with our cocktails that evening, but not before snapping a photo.

Not the Big One we were after.

Our sights are set on an even more unusual specimen for our next expedition. We’ve heard stories of a trout found only in the highest elevations, where streams and small lakes have ice, or at least slush, all year ’round. Feeding exclusively on high-flying insects that have lost their way and become frozen in the ice, perhaps the rarest of all trout waits for us in its cold, mountainous lair. Every available ice cube tray has been pressed into service, each compartment containing a fly, spider or wasp and, once the weather settles in the high country we’ll set out in pursuit of the rare and elusive Fur Bearing Trout. 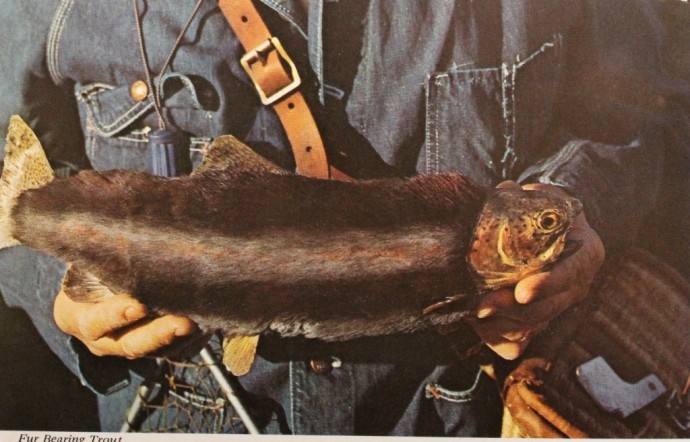 Sometimes I just can’t believe the variety of fishing adventures that await the creative and intrepid angler!

One thought on “Fishing Fools”

Thundersnow, just as cool the sixth time I've experienced it as it was the first.
Sheep
Tomato seedlings and the gargoyle in the greenhouse.
Covering sheep chores this weekend. The mayhem, sixty seconds before these photos were taken, is hard to describe.
The View From Quoyburray Farm.