There is a bewildering variety of game cameras, or trail cameras as they’re sometimes known, available on the market today, and some of the most common questions from consumers regard the camera’s resolution. I would like to take a few minutes today and go over with you some of the more confusing aspects of pixels, mega pixels, etc.

The resolution I am referring to is one I am making for 2013, and it is to use my game camera more.

One of the least expensive models at the time of purchase, it is very basic, but the first night I set it out it captured a few shots of a fisher snooping around not far from the chicken coop.

Since then, it has recorded the perpetrators of unauthorized construction activities …

even under cover of darkness.

It has also caught some unexpected images, like the heron in the picture below, just above the date (click to enlarge):

On the other hand, it has also taken quite a few “candid” pictures like this:

But I see herons when I’m out walking. 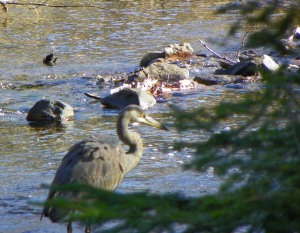 Sometimes I see the otters … 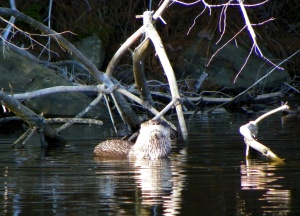 or a mink hunting along the shore …

so with all the wildlife I see each and every day, it’s not like I need to see what they do when I’m not around; they pretty much go about their business when I am.

I had an idea this summer, for a really creative use of my game camera, which I look forward to trying again in 2013. Mice can be a real issue in the camps around here and when someone finds mouse turds in their Doritos™ you can be sure who they’re gonna call. Other than put away their food for them, there’s not a lot I can do about the mice while they’re here, but I do set traps when the camps are empty and the game camera seemed well suited to documenting my trapping prowess, proving that I do my part to keep the mouse population down.

Someone suggested sharing the images I got, via the internet, as some people might find them entertaining, but I argued against that idea on the grounds that only sick, twisted people with black hearts would find such things amusing. Unfortunately, an accident occurred during set-up and, while serious injury was avoided, the project was abandoned for safety concerns and no mouse deaths were recorded.

“If You Think a Mouse in a Bag of Chips Makes Noise …” from June of last year,