The Outdoor Blogger Network announced on March 1st that Fall River Flyrods was building a custom bamboo rod to be fished by 15 anglers over the course of the season, with one of the 15 owning that rod when all was said and done. The lucky 15 were chosen at random from over 100 interested anglers, which worked out well for me because I am much better at random chance than well-developed skill.

Montana Fly Company provided a 5/6 wt Madison II reel, with a beautiful “River Rock” finish, and RIO Products chipped in with their Trout LT DT5F fly line to complete the outfit. I would like to thank Fall River Flyrods, Montana Fly Company and RIO Products for giving me and 14 other anglers the opportunity to play with this rig, and I would especially like to thank Joe and Rebecca for all the hard work and dedication they have put into making The Outdoor Blogger Network the great place it has become. Over 1000 Outdoor Bloggers, all connected together for your reading pleasure. Imagine that.

I would also like to point out that I have no connections with Fall River Fly Rods, Montana Fly Company, or RIO Products. Except for the chance to fish with this rod, reel, and line, I received nothing other than a great time, good memories, and a chance to connect with a wonderful bunch of outdoor bloggers.

There was a time when fly rods were made from glued strips of wood, such as ash and lancewood. Exceptionally long, and requiring two hands to cast, those rods were heavy and cumbersome. Rods made from split cane bamboo were shorter and lighter, bamboo was relatively plentiful, and in 1874, H.L. Leonard began making bamboo rods exclusively. A trade embargo on Chinese imports in 1950, along with the development of modern synthetic materials, pretty much ended large-scale bamboo rod production but a number of makers continue the tradition, producing custom rods that are not only beautiful but also make use of the best qualities of the long fibers of bamboo.

An entire generation or more has learned to fly fish using synthetics, and the trend has been toward lighter, faster rods, especially of graphite and boron, that load and have most of their power in the upper third of their length. Traditional bamboo rods are heavier, slower, and flex deeply, well into their lower third. Hand a bamboo rod to someone used to fishing rods made of modern materials and, at the very least, you will get a funny, puzzled look as they try to figure out what the heck just happened to their cast. Most will eventually catch on and settle into the rhythm of bamboo but they will more than likely say it is much too heavy and slow for them.

Jason Zicha, of Fall River Rods in Pocatello, Idaho, has created tapers for the rods he makes that more closely mimic the action of graphite, loading quickly and flexing toward the tip, like the “South Fork” model currently making its way around the country as part of a project put together by the Outdoor Blogger Network. Fifteen anglers will be giving this rod a workout (and a history) through the season and writing about it on their blogs, as well as adding their thoughts to the journal that is travelling with it. This is Part One of my experience with that rod.

One of the first comments I heard when I showed this rod to another fan of bamboo rods was, “Wow. Nice lettering.” The quality of a rod’s inscription may seem to have nothing to do with anything else, but it is a good indication of the attention to detail of the maker. From the lettering on the rod to the thread wraps and finish, everything about this blonde beauty is tasteful and well executed. The workmanship is top quality and the overall effect is aesthetically pleasing.

The Fall River Rods “South Fork” is a two-piece, 8 ft, 5wt rod, and comes with two perfectly matched tip sections. The second tip that comes with many bamboo rods is meant to be a spare, just in case, so an angler can continue to fish should the other one (gasp!) break or be out of service for repair. The two tips with this rod appear to made from the same piece of bamboo and are identical, right down to the positioning of the nodes on each strip.

Out of curiosity, I fished with each tip on the rod and could not tell any difference between them.

Details, details, details. Jason Zicha pays a lot of attention to them, from carefully laid wraps and exquisite finish to lettering, positioning of the nodes on the perfectly matched tips, and beyond. Fall River rods come wrapped in a utilitarian cloth sock inside a presentation quality, hexagonal, hardwood case and it pained me greatly to have to announce that the case had been marred on my watch. Everything was so pristine when it arrived, but just look what happened! 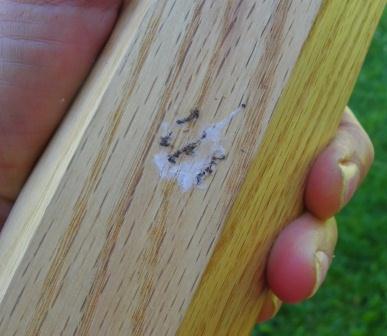 As an angler can approach the water looking the part, so can a rod, but looks will only carry so far. The obvious question to ask, of course, whether of a dude in fancy togs or a lovely to look at rod, is “how does it fish?” The answer in this case is “just dandy.”

The first fish I hooked using this rod was a spunky native, plucked from the shady shallows beneath an overhanging oak — a four inch dace that put up a struggle I very nearly felt. After that, it was nothing but trout and this rod handled all of them well. I was impressed by the liveliness of this rod and the way it responded when a fish was on. The only problem I ran into was a large rainbow that took a big Hexagenia dun and went insane, putting on moves like no fish I’ve ever hooked, and snapped my 4x tippet an inch and a half below the knot to the leader. It was definitely angler error and no fault of the rod that I wound up standing there with a surprised look on my face as the line went limp.

Compared to other bamboo rods, the Fall River “South Fork” fell somewhere in the middle, as far as weight is concerned. It is definitely lighter than my own 8ft Wright and McGill Granger Deluxe but it was heavier than some others that were fished at the same time. The weight is one factor that turns some people off from bamboo, but the way the “South Fork” casts will win them back. I have found it is easy to put too much effort into casting a bamboo rod and the “South Fork” is no exception. Let the rod do the work. Feel it. “Listen” to it. With very little encouragement, the “South Fork” loads well, throwing a lovely loop with dead-on accuracy. Any weight concerns are quickly overcome by the ease with which it casts.

I must admit that I did not keep the pleasure of casting this rod to myself. In fact, I passed it around like a cheap bottle of hooch in a brown paper bag. Everyone who cast it agreed its “sweet spot” was most obvious with shorter casts, or at least what passes for shorter casts around here. Lake fishing is different than stream fishing, and on Fish in a Barrel Pond it is not uncommon to want to pick up 40 feet of line and shoot another 20 with one stroke. The “South Fork” is not made for that kind of fishing. It is a rod for streams and rivers, laying out 40 foot casts with ease, but losing a little oomph when pushed too far. Adding a haul to the cast will get it out further, but all who cast it agreed it would be a great rod for smaller waters, especially those that flow.

For some, this was their first opportunity to cast a bamboo rod and it was interesting to watch as they adjusted their timing and stroke to match it. With a taper designed to resemble the action of modern graphite, I found it to be faster than the bamboo rods I use, but there is nothing like watching a guy who fishes modern synthetic rods force himself to slow down, relax, and wait while the rod does its stuff. Once they got the hang of it, though, nearly everyone who had never cast bamboo before was giving some serious thought to getting one of their own. Of course, we all now know just where to order one.

The Fall River Rods “South Fork” is well-built and a pleasure to behold. It tosses line easily and is lively as all get-out when a fish is on. Jason Zicha has crafted a real beauty and I thoroughly enjoyed my time with it. I especially enjoyed the opportunity to share it and the joys of bamboo with others, showing them that new techniques and modern methods can combine with tradition to create a bamboo rod that is most definitely not your grandfather’s rod. 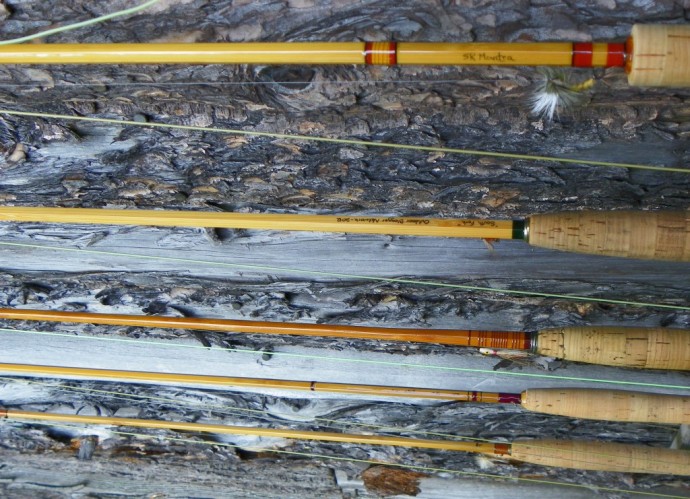 Others of the 15 who have fished the Outdoor Blogger Network Fall River Rods “South Fork”:

Dispatches from the Potomac

A Year on the Fly