I have no idea how many species (or genus, for that matter) of mayfly can be found on, in, and around Fish in a Barrel Pond, but only one gets anglers all aquiver like the Hex. Hexagenia limbata is one of the most geographically widespread mayflies in the United States and in addition to being huge (two inches long or more, including tails) they are known for emerging by the millions, in swarms so thick they show up on weather radar.

Around here, they emerge in numbers closer to the dozens, but a Hex hatch is a Hex hatch and I am constantly being asked if it is on. 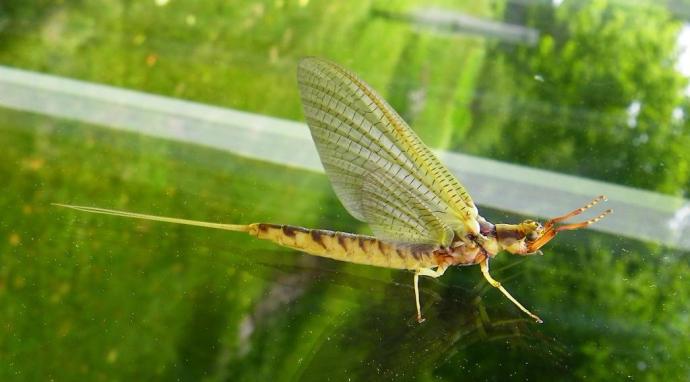 A newly-emerged dun on the window is hard to miss and worth a closer look. 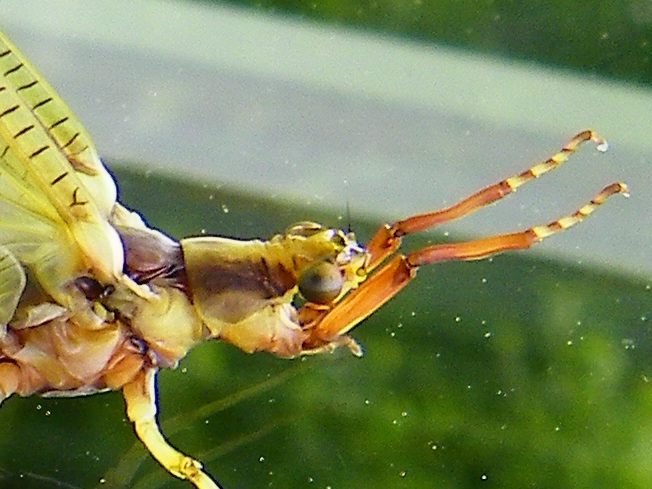 With less than 24 hours to live and only one task to accomplish, adult mayflies shed their skin one more time, changing color and leaving behing their dull, papery wings for clear, shimmering ones more appropriate for mating, followed by death. The Hex “spinner fall” usually takes place in the wee hours, and I have never seen a Hex after its final shed. It only occurs to me now that I could just catch the next dun I see, put it in a jar, and wait.

This moth is pretty cool and a good argument for twitching big, hairy flies after dark. A big meal for a big trout. 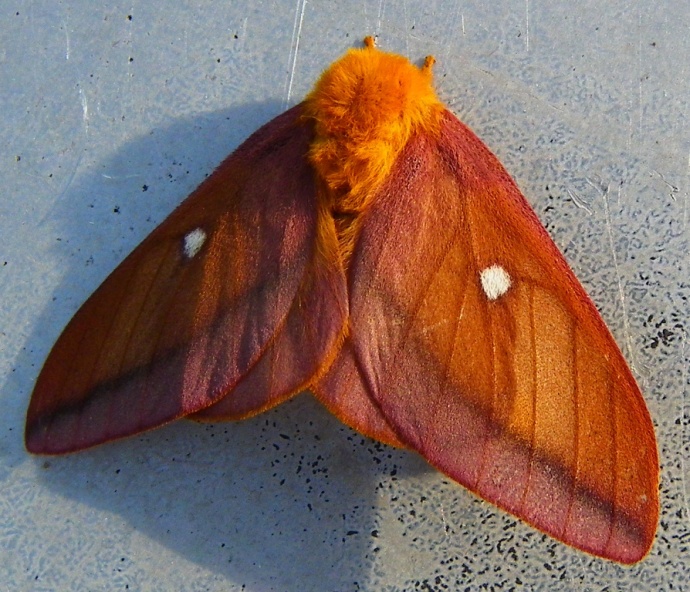 Leaving the lights on at night brings in all kinds of bugs. On just a few nights a year those bugs include luna moths, like this group on the wall of our motor shed.

The damselflies are out in full-force, climbing grass stalks and reeds as nymphs, shedding their skins, becoming adults and then doing what adult damselflies do.

Others just flit around, looking good. 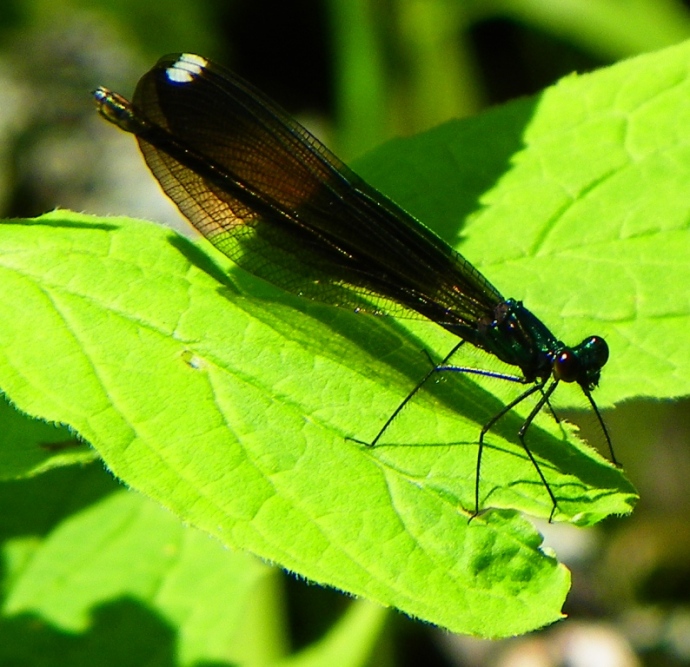 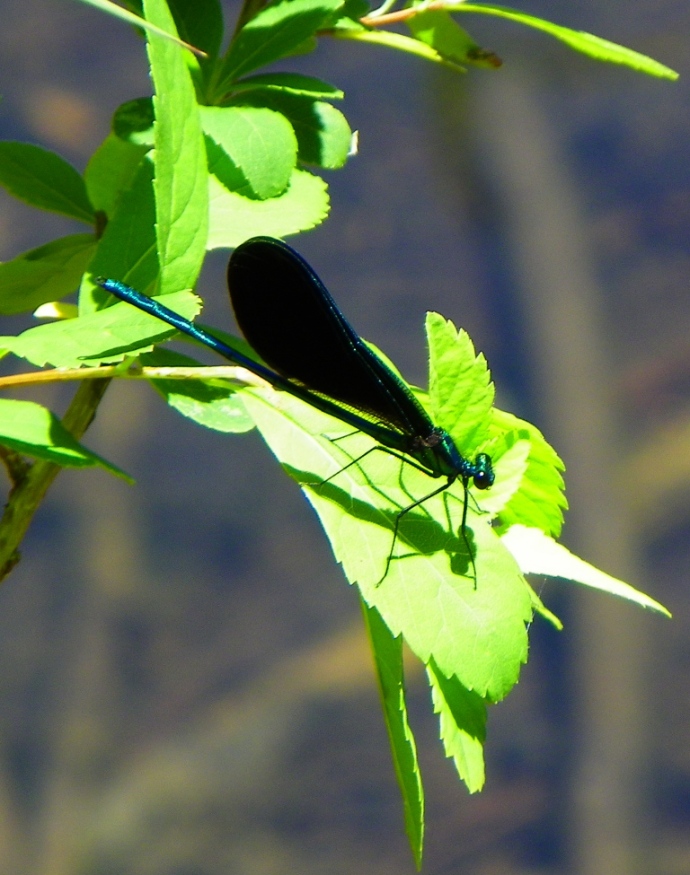 I admit it would have to be a pretty special set of circumstances for some of those big moths or their caterpillars to wind up in the water, but you can bet a trout would eat them if they did. Mayflies and damselflies, on the other hand, are eaten by fish at all stages in their lives and one of the most challenging aspects of fly fishing is coming up with a suitable imitation. I am not a rotten fly tier (“tier” vs. “tyer”; discuss below) but, while I may play around and try a few new patterns over the winter, I certainly don’t sit down and whip off a few dozen of anything, even if it is claimed the trout will eat them “like candy”. Of course, what we anglers present is more like the Halloween candy they warned us about when we were kids — the kind with a razor blade in it — but we anglers don’t like thinking about that, do we?  I’m the kind of guy more likely to gaze at the water in late afternoon, take a guess, and tie up three or four flies I think might work that evening. If I’m lucky I’ll finish before dark and actually get on the water with my concoctions. If I’m really lucky, someone else will sit down and tie some flies for me.

A couple of weeks ago that someone was Don Bastian. Don has fished here before and knows my super-secret true identity. He is also a good sport, taking a good-natured ribbing as well as anyone I’ve met and, as it turns out, he is also a pretty good angler. Don and I shared a boat one evening last week, fishing a yellow drake hatch that came off just as nicely as a hatch can on these waters (see this post, from last year), using a couple of extended-body patterns Don tied before we went out. The fish were feeding close to the bank and we each hooked up on nearly every cast. Bird song and the sound of slurping trout filled the air as we drifted along the shore in the fading light until only a thrush remained, serenading us from fifty feet away. Eventually, even the thrush went to bed and, as the other boats headed in, I lost my fly and reeled up my line but Don kept right on fishing. I have a feeling that if the hatch hadn’t shut down and full-on dark set in we’d still be out there now.

Above: A well-stocked fly tying station in late afternoon on the porch of a camp, complete with vise, light, bobbins, thread, tinsel, scissors, etc. I have no idea how that beer got in there, but the Mason jar contained weapons-grade head cement thinner which just happened to be blackberry flavored in case someone got thirsty (we did). In the foreground is a full beaver pelt with enough fur to dub hundreds and hundreds of flies. I’m still learning about natural fur dubbing so I asked Don if he could do anything with it. In mere minutes, Don had half a dozen nymphs ready to go.

I had a blast hanging out with Don (and Steve and Dick and Bill, who I see on a regular basis) and, even though his bobbin moves so fast it’s a blur, I picked up a few tricks and a lot of fly tying inspiration while Don was here. If you are at all interested in fly tying you should check out Don’s blog “Don Bastian Wet Flies“. You’ll be glad you did.

Now, just so no one gets the impression that it’s all fishing and tying flies around here, I end this post with the following photo from this past Saturday night. You’ll notice we weren’t tying flies, even though the jar of blackberry flavored head cement thinner is on the table. You’ll also notice I’m running low but I guarantee you won’t find that stuff at Orvis.