(At the top of this page is a tab that reads “Contact Quill” which will bring up a form you can use to send old Quill an email. A few readers have actually used it, and I’d like to share with you some of the notes I have received.)

I subscribed to your blog, but this is not at all what I had in mind and now I regret my decision. How do I make the email notifications stop?

I am sorry to hear you are no longer gruntled, but how do you think I feel, having to look at it every darn day? Take a look at the bottom of your email notification; there should be a link that says “Unsubscribe”. Click it and follow the directions, and you will never again be notified that impotant pieces like “Careful With That Axe, Eugene“, “A Craft Project With My Friend, Eugene“, or “Eugene and the Dangers of Shatter Proof Glass” have been  proudly published. ~QG

L.L. Bean’s very special Spring Fishing Expo and 100th Anniversary Celebration is this weekend. We’ll give you ten thousand dollars to stay away.

Your offer is tempting but, as much as I wanted to be there for what is sure to be a great weekend (including fly tying demonstrations by Don Bastian, a man with many stories that somehow involve him in his underwear, by the way), I must send my regrets for free. You see, I will be staying away for reasons of love.

My love of anglers.

I try to pretend I am an angler, just like everybody else, but I am not. I am an angler who, when others act on the urge to get away from it all, greets them when they arrive. I clean up after them when they leave, and then, on Sunday afternoon, I try to catch fish in a lake that has been whipped to a froth by them since Friday evening. I also take their reservations, which for the past month have been carefully regulated for fairness (only x number of nights per month, etc.). Starting March 16th, however, those rules are relaxed and anything goes. Someone must be here when they call, and that someone is I.

Freeport is safe this year, as I take one for the team, so everyone who can make it should attend. And be sure to say “Hi” to Don — he’s really starting to get the hang of tying those flies! ~QG

Remember when there was that huge flood and Vic flew up from Florida to mock your friend Ken while he stood in cold water, unplugging culverts? That was great.

Yeah, that was great. Sorry about your uncle, by the way. You must mean Tropical Storm Irene. Vic and Ken teamed up for quite a few posts after Irene, with Vic taking photos and Ken writing the words. Those posts can be found under the “A Project: In Vermont, After Irene” tab at the top of this page.

What’s the deal with snow fleas?

Snow fleas are cool. They propel themselves up to 100 times their body length, using an appendage called a furcula. I even wrote a post about it, called “The Snow Flea and the Furcula“. Now, if that wasn’t interesting enough, I find out that, just before “hopping”, three little “sticky vesicles are everted from the anus” which apparently act as a kind of “safety bag” and keep the snow fleas from bouncing around too much when they land. To learn more about snow fleas and their anal safety bags, check out this post from Naturally Curious with Mary Holland. I’m sure Mary Holland is a very nice person, but I’m afraid that an internet search, using key terms from this paragraph, will probably take you to sites very similar to the ones found searching for Vic’s book by title. ~QG

Sometimes I think you’re just making stuff up. I recently read your post “Diary of a Trout Bum” and found parts of it hard to believe, especially without photographic proof.

At the time, I could not find the photo I wanted to use as an illustration. Then I decided it worked well without illustrations or photos. For you, though, I dug through the files and found the photo I originally intended to use for Diary of a Trout Bum. Here it is:

Compared to what? ~QG

I read somewhere that Mud Season is one of the things that makes Vermonters the way they are. Is it still Mud Season up there?

I’m not sure that’s any of your darn business. ~QG

But since you asked:

Our last item arrived yesterday, via the United States Postal Service, from a loyal reader.

According to this article, while beards may be stylish and probably even a mark of alpha males, they are not necessarily a key tool for “attracting the ladies”. Sounds to me like the sort of hogwash that might be presented as fact by someone who cannot grow a beard of their own. I even read an article this winter about the dangers of wearing a beard in cold weather, claiming mostly that a beard actually encourages skin to freeze, and it’s harder to check for frostbite through a nice, thick layer of furry wonderfulness. Bald-faced tripe, I say.

The gist of the article above is that bearded men are aggressive looking, which enhances their percieved social staus, but that women find clean-shaven faces more “attractive” and bearded faces “scary”.  Sounds like something someone without a beard might tell themselves to feel better, if you ask me. The evolutionary implications, as suggested by presumably beardless wonders Paul Vassey and Barnaby Dixson, are that “the scarier guys, not the cuter ones, got the girls” because hairier men were “more successful at conveying aggression and securing loftier social status”. 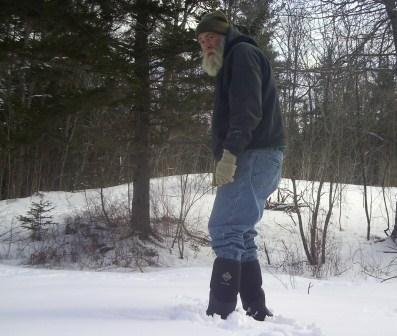 I think perhaps it was Shakespeare who said it best: “My status has been upped. Up yours.” ~QG

18 thoughts on “Answering Some Mail”