I have heard it said that the fin of a brook trout is the best bait to use to catch another brook trout. Pre-spawn, they stack up where the feeder streams come in, the males jostling for position and posturing for status, waiting for whatever signal it is that sends them streaking uphill to the spawning beds. In their finest fall colors, fins flick like flags and are nipped at in response, hence the logic of fluttering a disembodied fin through the pod.

The issue of obtaining said trout fin in the first place was addressed — in a Gordian Knot sort of way — by those who tie flies, a fine community of problem solvers. A few casts with a feathery fin fly were usually all it took to collect as many real fins as an angler could wish for.

The wet flies in the photo represent the flies from a color plate used in Ray Bergman’s book Trout, first published in 1938, and were tied by Don Bastian. Don was a guest at Fish in a Barrel Pond this summer and was kind enough to let me try some photos of the reproductions he has done of the plates from Bergman’s book.

Some people call this type of wet fly “fancy” and view them mostly as novelties from days gone by, but the fact remains that these flies caught fish way back when and they still catch fish today. One of my personal favorites is Queen of the Waters, fished three or four feet down, either alone or in  tandem with another of its kind or perhaps something dark and shiny like a Coachman or Blue Bottle.

Queen of the Waters, Blue Bottle, Not Tied by Don Bastian

The wings of my flies are generally malformed. My hackle leaves a lot to be desired, but that Queen of the Waters is particularly ratty because it has been chomped on a few times so I don’t think the fish really care. The wets I tie and fish are simple, practically rustic, due to my levels of skill and patience at the vise, but I would like very much to tie flies like the wets tied by Don.

If there is not a wet fly called Nonesuch, there ought to be. 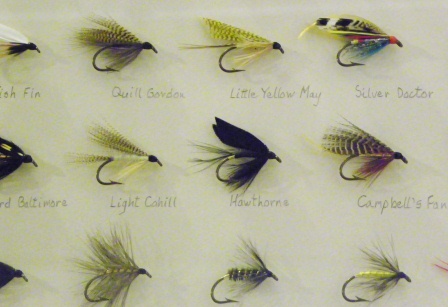 Some flies have both wet and dry versions, representing different stages of a hatch while others, like the Trout Fin are pretty straight forward in intent. Others may or may not be representational, reflecting whimsy and artistry as much as anything else. 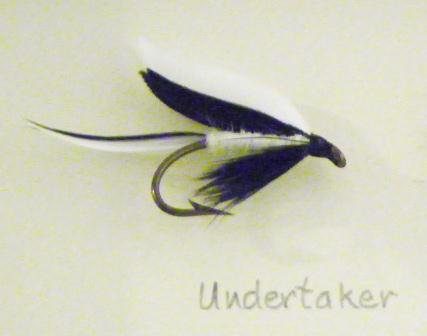 As with tying other types of flies, the tying of wet flies involves certain special techniques and the one that has always vexed me is the “marrying” of two or more colors of feather to get the stripes in the wings of flies like the Undertaker, Trout Fin, Silver Doctor and others. Don has it down pat. In fact, he has it down so pat that his technique is considered “Proprietary”. Don and his flies are quite well-known — at least among those who enjoy poking around in the dusty, romantic corners of our niche-filled pastime — and I’d sure like him to show me how he does it.

But here’s the thing: Don puts an awful lot of time and effort into sharing his knowledge with others as it is. These flies are what he does, and I can only imagine how many times he has answered the same questions and gone through the same motions, again and again, for enthusiastic brothers and sisters of the angle. The poor fellow deserves a break, just like anyone else with a daily grind, and that’s our specialty here at Fish in a Barrel Pond, so while he was here I just shut up and let him fish.

Sure, we chatted and made small talk when our paths crossed, discussing flies we might use in those conditions, in this spot, at that moment in time, but that was about it. I mean, if someone like John Gierach stopped by I wouldn’t ask him to bang out a few thousand meaningful words, and if Lewis Black came up for a weekend (as if) I wouldn’t ask him to do that funny thing where he scrunches up and gets all apoplectic about stuff. Heck, I don’t even take my old friend Dr. Marcus Feely up on the free digital exams he offers every time he’s here (“No trouble at all, Quill. I’ve got gloves in the car.”). Folks just don’t come up here to do what they do every day back home (most of them, anyway).

It turns out that not only can Mr. Bastian work wonders with feathers, tinsel and thread at his vise, he is also fairly competent with the finished product in the water, as evidenced by the picture on a phone I was shown one night while he was here:

That is a mighty fine square tail for these waters and not many that nice are recorded in any given year. Just look at those fins! Nicely done, Don.

In case those bits of flattery aren’t enough for a free lesson on married wings, Don recently announced  a forthcoming book titled The Favorite Flies of Mary Orvis Marbury, which will feature “replications of all 291 of the historic 19th Century fly patterns from Mary Orvis Marbury’s 1892 book, including written and in some instances, updated dressings in a fly tier-friendly format.” The exact publication date remains to be determined, but follow that link for information on reserving your very own SIGNED COPY of the LIMITED EDITION.

I’ll be wanting one of those copies, Don. Of course I’ll also need another new (to me) old bamboo rod for tossing those flies you’re going to show me to tie because rumor has it that brook trout was caught on a wooly bugger. But don’t worry — your secret is safe with me.

(Seriously, anyone with an interest in wet flies, especially the old “classics”, should look through Don Bastian’s blog. Tons and tons of information. Pretty pictures, too! Fly fishing offers us many, many ways to get our geek on and you could do a lot worse than with wet flies.)