There are times I miss the wide open spaces and expansive views of the West, like this one along the Arkansas River (if you pronounce it “Arkansaw” I won’t hold it against you), just south of Cañon City, Colorado. Cactus and cottonwoods have a certain appeal, especially when there are trout nearby. 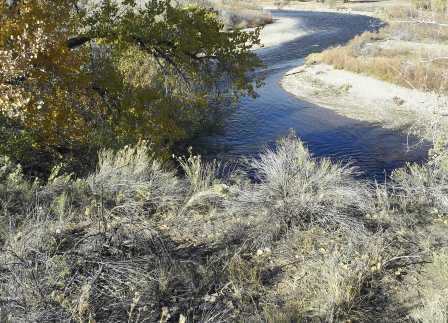 Did I wet a line? No, I did not. I caught fish, though, at least in my head, but they were mostly ghosts of memories from days gone by, sweetly bitter like sage brush and cholla. 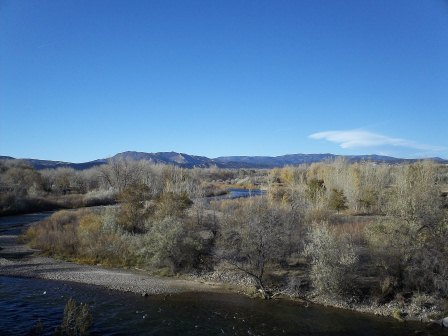 Contemplation was enough this time around, so I watched and guessed, making mental casts to fish that might have been mirages but sure seemed real enough, especially a big Brown that flashed every minute or so as it darted into the current from its lair among the roots of a fallen cottonwood.

In the days of my youth that fish would have woven my leader through those roots and broken it off but as I sat there, older and wiser, I saw nothing but success. Experience shows, even with imaginary casts. Where once I would have cursed and flailed until the sun went down, it was enough now to envision the drift, the take, and the steady hand guiding that fish into the main current, away from the roots to the near bank to be netted and released. As a man with a gray beard I can do that again and again, especially in my sleep. Maybe I will go back some day and get that fish for real, but whatever it would prove would be only to myself.

It seems harder and harder these days to escape the hand of man but, where the Arkansas River meets the concrete and steel of a small city, there are at least some interesting photos to be had.

In Vermont I live among scenery, when I lived in Colorado I had views, some of them downright iconic.

More and larger houses creep further up the foothills, strategically built for everyone else to look at. I found it disturbing all those years ago but now it strikes me as profane. What I think doesn’t matter, though, and there is not much to be done about it. Wealth and politics are pretty much in your face where I grew up, and what I remembered was very much at odds with what it has become.

While the mountains may slow growth to the west, out east, on the plains, development spreads like wildfire. It’s all for sale and thousands of identical houses sprawl beyond the horizon.

There wasn’t enough water for everyone way back when, and there ain’t enough now, but little things like that can’t stand in the way of progress. Abandoned malls and shopping centers stand empty, but for every closed “big box” two more go in just to the east and if you miss the turn for one crappy, mass produced burger (or pizza, taco, or doughnut), have no fear — another is available just ahead, as dusty cow paths have a way of becoming eight lanes of asphalt.

Colorado Springs may seem to have modeled its growth policy after that of a tumor, but some things I remember are still there, maybe a little worse for wear, but still there none the less.

I have hoisted a schooner of one of the same two kinds of warm beer at Murphy’s in each of the last four decades, whatever that says, and the Hogan roadhouse just won’t go away. 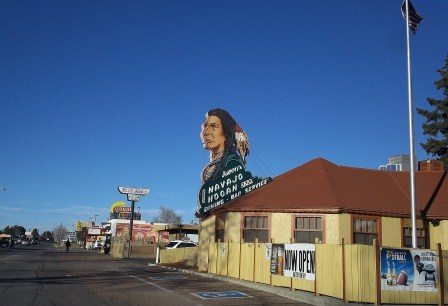 These old places have real neon signs instead of back-lit plastic and were once on the edge of town because that’s where bars and taverns were supposed to be, instead of all over the darn place. We didn’t have drunken scarecrows passed out in the gutters back in the old days.

Personally, I don’t think growth for the sake of growth is a good thing, but what do I know? I moved away long ago and hadn’t been back in quite a while, so it was a bit of a surprise to see my former hometown so frantic, angry, and parched — just the opposite of what I grew up to be — but just like that fish in the roots, most of my old friends and some of the old haunts will always be there, at least in my head.

Like visiting with a familiar stranger, it was not an entirely unpleasant experience but I am glad to be back in the place I choose to call home and now, if you’ll excuse me, I just flew 2,000 miles. Boy, are my arms tired.