My friend, Victor Salvo, made his way from Florida to Vermont shortly after Tropical Storm Irene spent 24 hours trying to erase Vermont from the map. During a break from mucking out our little village market, Victor had a conversation with Lyman Orton, one of the owners of the Vermont Country Store, in which Mr. Orton stressed the importance of letting the rest of the world know that Vermont was still here and open for business. Much of our economy relies on visitors to the state and, with fall foliage season right around the corner, people needed to know “Vermont is Open for Business”.

Standing in a muddy parking lot, with an entire store’s rotting inventory in the giant dumpster behind him, it sounded at first like so much rah-rah from the folks at the Chamber of Commerce — and at first it probably was — but after a few days the village green had been cleaned up and a few OPEN flags flew again. Vermont was, indeed, open for business.

The process of assessing and repairing all the damage done by Irene still goes on, but there are many places where people now say it looks like nothing happened at all. That is a testament to the hundreds of thousands of man hours the people of Vermont have put in, along with some serious help from volunteers, government employees and National Guard troops from all over the country and utility crews from the U.S. and Canada. It also points out what can happen when disaster strikes in a place where every third person owns a chainsaw, tractor, bucket loader, back hoe or excavator.

Victor and I decided to make a project of documenting and commenting on the recovery efforts, and what started out as a simple search for OPEN signs amidst the wreckage turned into something a bit more. Victor set out with his cameras, taking pictures in and around Weston, Jamaica, Chester, South Woodstock and Bethel, Vermont. He captured images of wrecked homes and livelihoods, crumbled infrastructure and many places that will never be the same. He also took photos of people whose lives will never be the same, having been through a disaster of some magnitude.

Whether dazed and lost or just there to help, those people have gone through hell together. Many of them are still going through it and will for some time to come. With the exception of some of the people who came from far away to offer aid and comfort, most of us had never been through anything like this before. Not knowing what to do, friends and neighbors just did what they could and now it looks like Vermont will be okay after all.

Hotels, motels, B&Bs and inns are taking guests and more than one bus sat parked by the green yesterday while its passengers raided the penny candy at Vermont Country Store, so the engine of commerce sputters along (the leaves are lovely, by the way). Many thanks to business leaders like the Orton family for supporting their communities during a time of need and for bucking us up while we were down, and special thanks to Lyman Orton for sparking the idea for this project. Vermont’s businesses keep her economy rolling, no doubt about it, but it is her people that keep her strong. 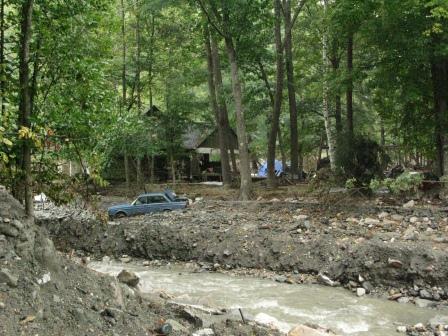 If a flood came through, ripping walls from one’s house and filling one’s car with rocks, one might be forgiven if, when approached by a dashing young man with a camera, one’s first instinct was to draw a bead and start counting. 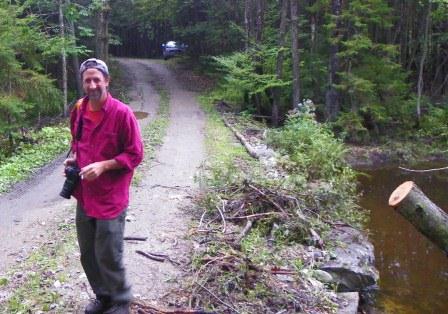 Photo Not by Victor Salvo

One might be reluctant to invite a stranger into one’s home, such as it was, to enjoy the new view from the kitchen. 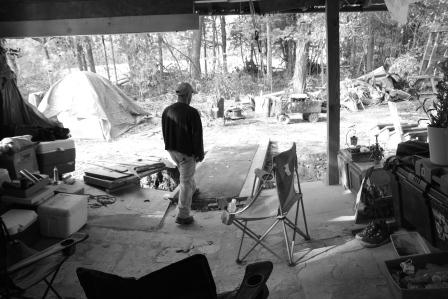 One might hope the wrecked piano didn’t interfere with another’s view of the high-water mark in the hall. 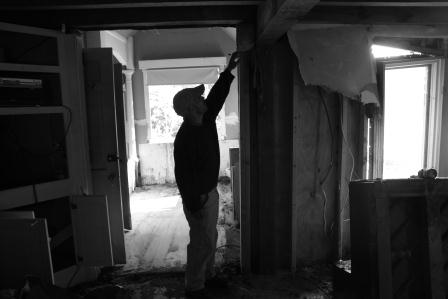 One might feel discomfort, displaying treasured possessions ruined by one night of furious rain, especially if it was raining outside once again. 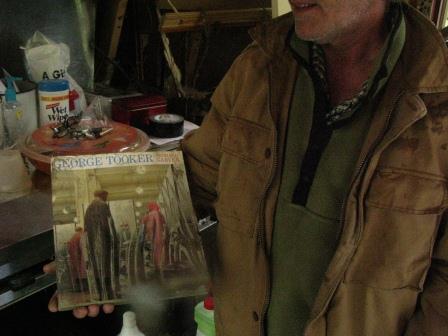 If a flood came through, ripping walls from my house and filling my car with rocks, and a dashing young man with a camera approached, I don’t know what I would do. A man named Don gave Vic a dry shirt to wear and put on a pot of coffee. 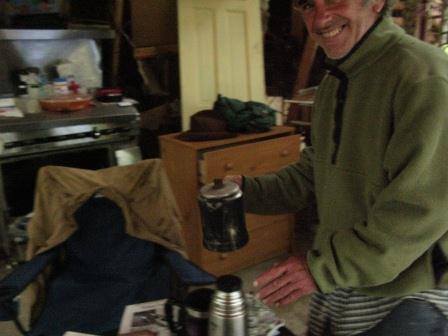 Vic has been working to raise money to rebuild a school in Haiti, where recovery from an earthquake last year still goes on. He has created a book of images taken there and is running a campaign with that book as an incentive. I’ve seen the book, called “Compassion is for the Weak”. The photos are striking. There are 8 days left in his campaign and he has a long way to go before he reaches his goal. Visit Vic’s Haiti project page HERE and watch the video. Maybe you will be able to help. Vic’s website, featuring other photos he’s taken is HERE. Check it out.

Someplace very specific, nowhere in particular.
I have yet to figure out how flies, at the end of speeding lines, can tie such neat half hitches around slender hemlock twigs, just out of reach.
A few more 'taters on a soft September morning.
4445
Larvae of the black swallowtail butterfly (Papilio polyxenes) absorb toxins from the plants they eat, in this case dill, making them poisonous to predators. Before things get to that point and both predator and prey die, they discourage further messing around by throwing their head back, sticking out a fleshy orange horn called an osmeterium, and smearing those foul smelling toxins on their tormentor. Certainly enough to put me off pickles for a while.
First spuds to the farm stand.