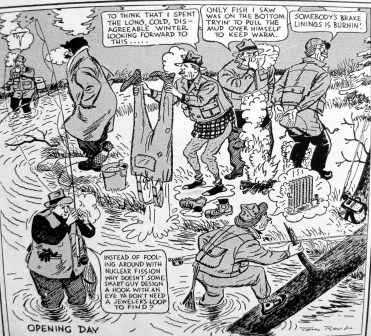 Opening Day 2011 dawned a tad bit cool and more than just a little breezy, and the members and guests of the Neverwas Nonesuch Angling Society reacted accordingly. Some searched out sheltered spots to cast while others trolled streamers, slapping their way through the chop on the upwind leg of their circuit. By breakfast, most had touched enough trout to have no problem not going back out but a few anglers, suffering from the delusion that nothing matters but numbers, couldn’t be bothered to come in even for coffee. 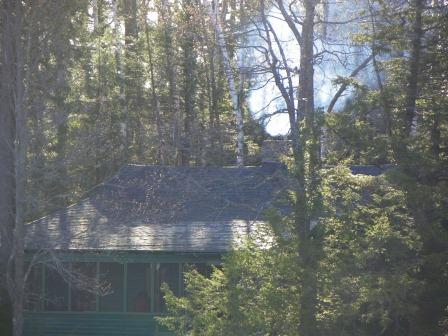 One group, five proctologists we’ve met before, made absolutely no attempt at outdoor activities other than to step out from time to time to shake their fists at Milt Audette, Wally Gibb and Leonard “Stinky” Taft, who trolled past every fifteen minutes or so, all three in the same boat, hurling insults and hooting in derision. Milt and the boys have been on Fish in a Barrel Pond every Opening Day since 1962 and find it an insult that anyone would attend and not even try to fish, no matter the weather. That insult was compounded by the fact that Doc Feely and his colleagues had managed to reserve the boys’ favorite Opening Day camp, ending a 49 year tradition. 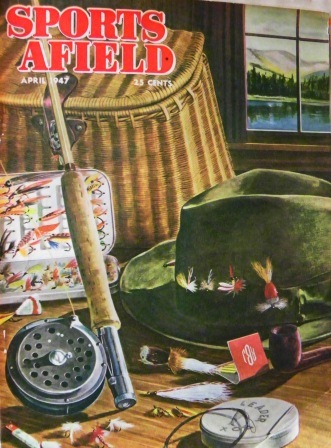 I stayed busy, tending the fire in the lodge’s stone fireplace and taking care of details (none of which, thankfully, involved toilets) while watching the action on the lake and wishing I was out there. More members and their guests arrived throughout the afternoon, choosing the warm fire over the opportunity to fish, so I put them to work and by 5:00 the lodge was set up for that evening’s annual Opening Day dinner and social time. (The real story of what happened that night must wait. It involves my good friend, Eugene, so I must carefully choose my words but it might also be a good idea if I consult an attorney before the telling.)

One of the most fascinating aspects of my position is the opportunity to observe a large and diverse group of anglers. Each has his or her own idea of what is proper — some to the point of snobbery —   and while some are content working with what they have, others must have only the best of everything — which often means only the newest. I watch and learn, increasing my knowledge and developing my tastes by paying close attention to everything this eclectic bunch of anglers brings to the table.

In spite of all the fun that was had on Saturday night, a few boats were on the water on Sunday morning at 0-dark-30, their occupants squeezing in as much fishing time as they could before heading home. I made my rounds, mooching breakfasts, wishing everyone well while subtly encouraging early departures, and by noon I was standing in the road, waving good-bye. The warm, spring sun was quite a contrast to the last time I bid those intrepid anglers adieu, back in October, in blizzard-like conditions that chilled me to the bone.

Heck, the warm spring sun was quite a contrast to conditions just a week ago, when it seemed the ice would never go away and getting the camps open seemed an impossible task. After a long, dark winter that managed to piss off even the old-timers, a day like this was nearly enough to make a grown man want to skip.

I gathered and sorted wet towels, used bed linen, trash and recyclables, thinking the whole time that it was, at long last, almost my turn to fish. I might have thought twice about going out in the raw, windy weather the day before, but there could be no second thoughts on a day like this. My rod had been rigged up for a week and was waiting beside my gear bag and net, so I was out the door in no time at all, practically giddy with anticipation as I made my way to the old wooden dock.

Movement in the water beneath the gangway caught my eye and I looked down to see a group of dace darting among the timbers, feeding on free-swimming mayfly nymphs. I’ve done well, early in past seasons, fishing a bead head hare’s ear and those nymphs made it look like there was no point in changing now.

In my mind, I knew just how it would go; a few false casts to play out line, with the familiar “tick” of my fly bouncing off the deck on every back cast; a loop of line quivering its way over the water, turning over and straightening out nicely except for a completely unnecessary curve to the left; and then I would count to three, letting my weighted fly sink to what might or might not be the proper depth before bringing it back, stripping in line with three sharp tugs and a pause.

At the start of the second or third series of tugs, I would feel the take, set the hook and marvel as sixteen inches of silvery trout broke through the surface in a mighty leap. Its crimson flank would flash in the warm, spring light and droplets of cold water would sparkle in the sun as it splashed down and took off on a serious run. My reel would sing as line peeled off but I would gain it back, take control and land the fish, releasing it unharmed.

I sat down on one of our weather-worn benches and rummaged through my bag for a fly. A nice #16 hare’s ear nymph was eventually located in a box full of elk hair caddis and it was with shaky hands that I knotted it onto my tippet. After clipping the tag, I sat and savored the moment.

Where there had been snow, now there were flowers. Bird song abounded and behind me the air was filled with the sounds of courting frogs while the flooded ditch filled with their spawn. Daffodils nodded their bright yellow heads in the breeze while an osprey wheeled overhead and it seemed like a moment of catharsis to realize the long, dark winter was over and the season of promise and renewal was truly upon us.

Winter was past, as was the frantic week and a half of digging out camps, chasing down and eliminating water leaks, sweeping, dusting and everything else that went into getting things up and running. Even Opening Day was now in the past and there I was, sitting in the warm sun with a fly on my line, dozens of rises and swirls on the water before me, a charge of hard work behind me and the world practically bursting into song all around. I believe what I did next is exactly what any other person in my situation would have done.

I curled up and took a nap.