Abercrombie & Fitch was once one of the premier purveyors of gear and clothing for fly fishing. 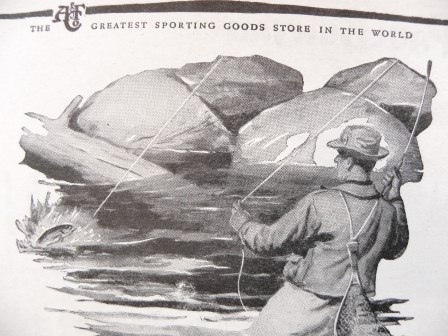 Modesty was not their strongest trait but by most accounts, if they were not the “greatest sporting goods store in the world,” they were pretty darn close.

Their ads were classy and uncluttered and their catalog was one of the most popular of its day. Rods from the House of Hardy and fly boxes from Wheatley were featured prominently. 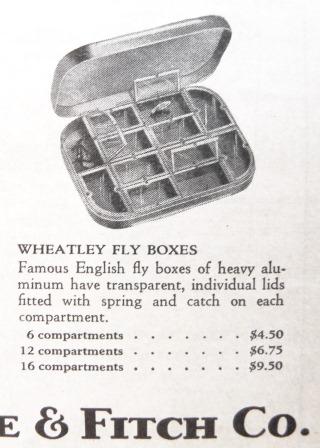 Hardy is still in business, thoroughly modern and just as classy as ever, and Richard Wheatley just celebrated its 150th year in business. One of their 16 compartment boxes will cost you a bit more than the $9.50 it did in 1947, but they have stuck with what they do best and their products are considered to be among the finest available.

Swell, outdoorsy fellows looking to outfit themselves with quality and style can still turn to some of the names their great-grandfathers did business with, but Abercrombie & Fitch is not among them. Heading off in a completely different direction during the latter part of the 20th Century, Abercrombie & Fitch dropped the bamboo rods and plaid Pendleton shirts and, according to this article on CNN.com, now stands poised to dominate the market of padded, push-up bikinis for seven year-old girls.

I thought about linking to abercrombieandfitch.com so you could decide for yourselves whether this was a good thing or not, but their site use policy threatens the wrath of highly-paid, sharply-dressed lawyers if anyone should so much as even think about linking to them. I don’t know how you feel about this sort of thing either, so you can scroll to the bottom of their home page HERE and read their site use agreement yourself.

I agree — that wasn’t very funny at all.

I don’t know if what follows is funny, either, but it is at least interesting. 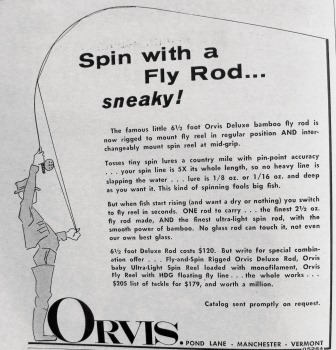 An itty-bitty 6 1/2 foot, 2 1/2 ounce bamboo rod, rigged to accept both spin and fly reels! Knowing where most anglers would use a short, light rod, I don’t think it would be necessary to “toss tiny spin lures a country mile”.

On my most recent visit to the Orvis website, I found only one spinning reel (Shimano) and one spinning rod listed. Their dedication to fly fishing is admirable and appreciated but, as illustrated above, Orvis has also been willing to at least try to change with the times. Their product line has expanded to include luggage, clothing and other “lifestyle” oriented items inluding swimwear for women, like this particularly racy number. Woo woo!

This past Friday was spent in pursuit of even more material for future editions of Flashback Friday and that is why, this week, it appears on Sunday. No bamboo rods this time around, but I did find plenty of interesting stuff like this:

I am developing a serious liking for cover art.