An Impressive Start to Mud Season

A stiff, warm breeze has kicked the process of melting into high gear and mud season is upon us. Driving on an unpaved road can be an adventure this time of year, even for those who have experienced mud season before. Four wheel drive certainly helps, but so do ground clearance and a certain amount of good judgement.

We wondered all morning, Mrs. Gordon and I, if anyone would get stuck today and if so, whom. It’s early yet, so there is still time for my choices (the weekend people from New Jersey) to hit the ditch but they catch a bit of a break today by not being the first to get stuck in the mud of our road.

That honor goes to a tiny little car from Massachusetts.

And it only gets worse from here!

I once came across a Hummer with Massachusetts plates, stuck in a ditch during mud season but did not have my camera along so I had to settle for laughing at the driver before shifting into low and leaving him behind, not even twenty yards up a hundred yard hill. It still bothers me to not have a photo of that Hummer in the ditch so when the driver of this car knocked sheepishly at the door, looking for help, I said, “Sure! Just let me grab my camera.” 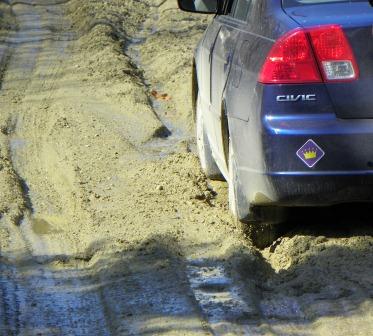 Frankly, I’m surprised they made it this far up the side of Nonesuch Mountain and I’m not sure why they kept trying to go further, but they did, plowing with the skirting at the nose of the car until they were stopped dead in their tracks. I did give them credit, though, for staying out of the ditch.

It doesn’t look like things will be drying out any time real soon — and I certainly don’t expect people will stay off our road — so maybe we can look forward to more entertainment like this in the next couple of weeks. And if, as I’m taking pictures before pulling you out, you ask how (other than a large 4×4 truck) I avoid becoming stuck in this springtime morrass, I will tell you I just don’t go out and about. That’s not dry Yankee humor; it’s good judgement.

7 thoughts on “An Impressive Start to Mud Season”