Of course, the reason a fish thinks the way he does is that his brain is very tiny in relation to his body. So the tinier the fisherman’s brain the easier it is for him to think like a fish, and catch trout right and left.”

Many an angler has one or more shelves full of, or tables leveled with, books containing some of the finest outdoor sporting writing ever produced — the  literature of fishing. Names like Haig-Brown and Halford, Maclean and McGuane, Skues, Ford, Walton and a hundred more fill the pages of collections and compendiums, readers for fireside and bedside, as well as books pocket-sized and absolutely gigantic. Some writers are represented with snippets or single pieces, while others justify entire books of their own. Writers like John Gierach, for example, who I appreciate for several reasons, including the fact that Still Life with Brook Trout has done more for me to keep things from sliding off this table than any other fishing book in my collection.

One name conspicuously absent from many of these literary assemblages is that of Ed Zern. Why is Ed Zern not up there next to other greats like Halford and Hemingway? Mostly because his last name begins with Z, not H, but also possibly due to the seriousness with which anglers take themselves and his tendency to crack wise, as shown in the quote above. Today’s selection from the Mixed-Up Shelves of Quill Gordon is Ed Zern’s first book, To Hell with Fishing, published in 1945, with cartoons by H.T. Webster. 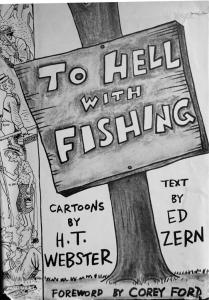 Ed Zern was more than a crackpot with access to a typewriter. In To Hell with Fishing, he showed he was also a sharp literary critic, unafraid to take on giants, even those as revered as Izaak Walton. In a short critique regarding the Compleat Angler, or the Contemplative Man’s Recreation, Mr. Zern points out that “even nonfishermen could not spell very good in those days” and goes on to speculate that Piscator, in disgust, went on to become a stage director.

He also notes that, in the introduction to his book, Walton refers to “the honest Angler,” which shows just how much Izaak Walton knew, although Mr. Zern gives Mr. Walton credit for being observant, backing it up with the example of Part 1, Chapter IV, where Walton writes, “And next you are to notice, that the Trout is not like the Crocodile.”

Mr. Zern then goes on to write about a girl he knew in Hamtramck, Michigan, but parts have been redacted by the publisher, who included a reference to postal regulations regarding sending such things through the mail. (Ed Zern also once tackled Lady Chatterley’s Lover, noting the many pages of “extraneous material” one had to wade through to get to the good parts about the management of an upland shooting estate.)

Ed Zern knew the waters and personalities around the Beaverkill, including Walt Dette’s seven Siamese cats. He also knew anglers and their ilk in the city, stopping in to visit the famous Angler’s Roost and offering his readers important details that others might have missed. He wrote, “Lizzie Greig, the Gal Fly-tier of the Angler’s Roost, was born in Scotland on the River Tweed. It was too late at night to borrow the greengrocer’s scales, so they used the one her father used for Salmon. She weighed 34 lbs., 5 ozs.” 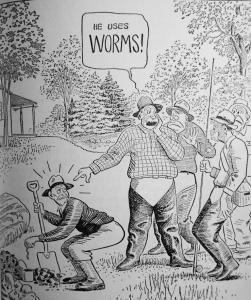 The importance of fishing guides can’t be overestimated and Ed Zern was keenly aware of this as far back as 1945. As he put it, “No wonder normal people can’t stand fishermen. Fishermen can’t stand each other. They have to pay people to keep them company.

“Guides are people who can stand anybody. For seven dollars a day and their keep, they will associate with fishermen. For eight dollars a day, who knows what they would do?”

It is a tribute to Ed Zern’s importance among the literary greats of fishing literature that no less a luminary than Corey Ford wrote the foreword to To Hell with Fishing, wondering why a forward was necessary for a collection of cartoons by H.T. “Webbie” Webster and completely neglecting the text written by Zern. To Hell with Fishing proved to be very popular, though Ed Zern himself said that fishermen didn’t buy it; it was bought by others to give to fishermen.

So, who was this man who might not have said it but certainly understood that one can’t truly enjoy fly fishing until one has a family of one’s own to neglect?

Born in West Virginia in 1910, Edward Geary Zern learned to fly fish from his father, a mine inspector, and found himself troubled at an early age by the pollution created by mine tailings. After graduating in 1932 with a degree in English literature from Pennsylvania State University, he moved to France, where he went broke in four months and did not write a novel. After returning to the U.S. he took a job as a merchant seaman before eventually marrying and becoming an advertising man.

His ads for Nash automobiles were successful and he spent his spare time hunting and fishing. Disappointed with what he read in sporting magazines, he began submitting pieces to Field & Stream and was soon making a living as a freelance writer. Books followed and while Ed Zern still worked in advertising he became a contributing editor to Sports Illustrated and was published in the New York Times, Audubon and other outlets. His Exit Laughing column first appeared at the back of Field & Stream in 1958 and ran for more than 30 years, seen at one time by more than ten million subscribers each month.

Ed Zern hated “game hogs” and polluters and thought a strong conservation ethic was about the finest trait a sportsman could posess. First Gulf, then Chevron/Texaco sponsored a conservation award he established and he always stood up against those who violated the written and unwritten laws of sportsmanship, conservation, decency and courtesy.

Some of his humor might not be considered appropriate these days. Not to beat a dead horse harder, but his humor was a product of its time, and references to “the little woman” and jokes about wives calling rods “poles,” flies “bait”, and creels “the darlingest wicker baskets” abound. 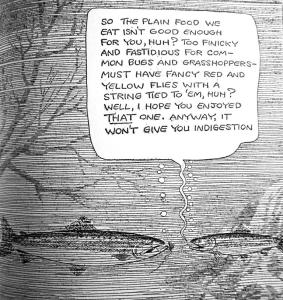 Ed Zern said he was “not opposed to women as such, or even as fishermen.” He was also decidedly not opposed them as fly-tyers, bowing deeply to the likes of Liz Greig, Winnie Dette, and Elsie Darbee. He did however, wish it to be known that it was not his fault they looked lumpy in waders.

Some things do not change, though, and Ed Zern captured well what some consider to be one of fly fishing’s several “golden” ages in a way that is relateable today. He also reminds us at the same time that, when a guide calls a fisherman a “sport”, the other guides know what he means. 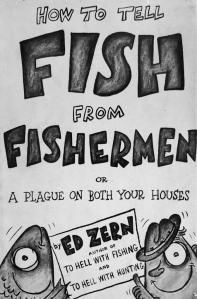 How to Tell Fish from Fishermen

Ed Zern died of Parkinson’s Disease in 1994, claiming that the shakes had kept his wrist watch wound and enabled him to more fully imitate an insect on the water with his flies when he fished.

Other books by Ed Zern include How to Tell Fish from Fishermen; or, A Plague on Both Your Houses, To Hell with Hunting, Are Fishermen People?, and How to Catch a Mermaid (a copy of which I would personally love to get my hands on). One could do a lot worse than to squeeze in Ed Zern’s slim volumes amongst their Gierach, Maclean, and Walton. Now that I think about it, To Hell with Fishing looks about right to level my moss-covered three-handled family gradunza…

12 thoughts on “To Hell with Fishing”