Snowshoes were appropriate footwear on Bobo’s Mountain last Tuesday as the last taps went in, racing against a warm-up that promised a run of sap (see “Something is Running and It’s not Me“). The race was won, the sap was caught, and by Friday children were seen running barefoot.

Three feet of snow disappeared. Some simply sublimated but most of it melted, running noisily down the hill as runnels met rivulets and rills became brooks, braiding their way toward the river.

It turns out that this year’s first boil took place on the same date as last year’s but whether or not that means anything is still open to conjecture. By the time this first run was over, somewhere in the neighborhood of 7,000 gallons of sap had been processed.

There is a funky earthiness to the first steam of the first boil that smells nothing at all like syrup. As it boils, clear sap starts to turn brown and sugars concentrate. Eventually, the aroma is more like the familiar mix of wet wood and vanilla but the concentration of sugars signaled by that change can take a while to reach. Every batch of syrup from here on will start with some of the previous batch, intentionally left behind to “sweeten the pan.”. 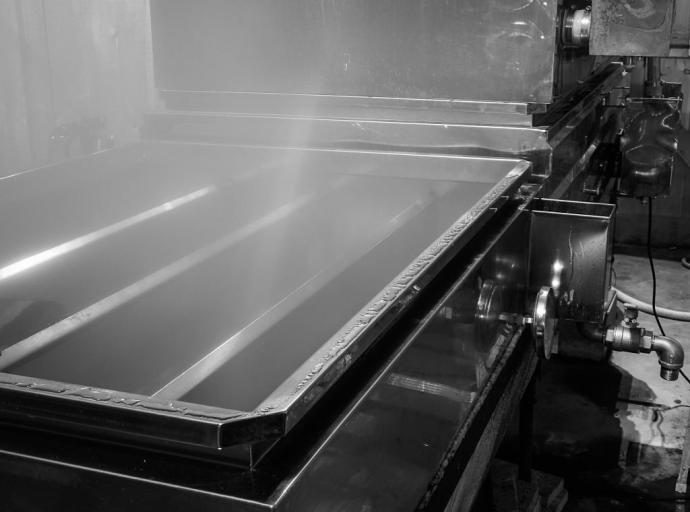 The Other Side of That Big Hot Metal Box

You don’t need a weatherman to know which way the wind blows and I don’t need no giant squirrel to tell me winter ain’t over, but a hint of spring is always welcome this time of year.

Sunset from the Sugarhouse

With temperatures above freezing four nights in a row, the first sap run of the year had become a mere trickle when it fizzled to a close late Saturday as a cold front blew through. Both trees and people could use a little break, to recharge and get ready for the next sap run in a season that could end without notice.

Some 2500 taps produced around 7000 gallons of sap over the course of four days, and some 100+ man and woman hours were spent tending pumps and filters, stoking fires and avoiding scalding liquids.

The Place To Be On A Friday Night

While cold rain and snowflakes streaked sideways on a chilly west wind, Boil #4 of 2017 slowed to a simmer and then went quiet as the fire in the arch died down. Doing the math in one’s head, while skidding, sliding and bumping down a rutted mud road on Saturday night, was not as hard as one thought it might be, and the conclusion was reached that 130 more gallons of Vermont maple syrup had been wrought forth in the past few days.

Minus a quart or two for the help, of course.

(Editor’s Note: Here is the link to the official web site of Bobo’s Mountain Sugar. Bobo’s is also on facebook and Instagram, too. I just work there.)

One thought on “A Big Hot Metal Box”