The curmudgeonly demeanor so essential to my charm nearly veered into the ditch of sociopathic behavior a few times this winter as the Shack Nasties made their annual bid for control. The Shack Nasties are terrible things, related to Cabin Fever but having nothing to do with the need to get outside. Cabin Fever is easily treated but the Shack Nasties are insidious and, once contracted, their cure consists mostly of endurance. Hundreds of blog posts and internet articles appeared this winter, with headlines like “Ten Quick Hacks to Beat the Winter Blahs” and I could almost relate, but my hacking was from working in the cold air and, on a good day, if I tried real hard, I could almost get myself worked up to “blah.”

Where the ground doesn’t freeze much more than three feet deep most years, burying water lines four feet deep should do the trick, except in those years the ground freezes down to five, causing even the most stoic Vermonters to quietly cuss to themselves. But after a drive through a squall, over Horrible Mountain to the grocery store for bottled water and standing in line behind a lady yammering on her phone about that evening’s wine selection, I’m afraid my cussing might not have been to myself. In fact, I know it wasn’t but, gosh darn it, you don’t serve Barolo with Dover Sole and who in the heck convinced the women of New Jersey that yoga pants and Ugg boots are appropriate winter-wear anywhere in the world, let alone Vermont?

Every year, winter’s back breaks and, every year, I make a joke about how it’s too bad you can’t just shoot winter in the head and get it over with, but the protracted death of winter is one of the best parts of spring and, after a winter like this one, it is a pleasure to gawk while it dies. Trees and power lines came down as the snow piled up, the cold settled in and more than a month passed between days (or in our case, hours) above freezing, but the coldest days have passed and all of a sudden it appears we’ve turned a corner (or at least tried to) as the roads have become a little less icy. 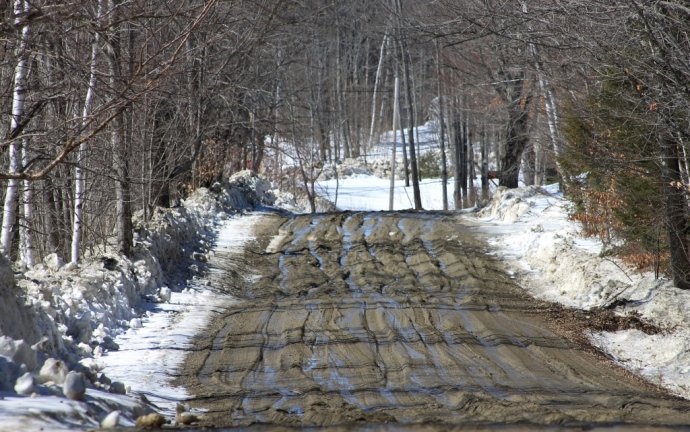 The Second Day of Mud Season

There are those who say spring is the season that most defines Vermont and its inhabitants and I agree. Not the spring of pussy willows and daffodils and baby bunnies on Easter cards, but the spring of thawing and melting and mud. The one time of year when the only people who are here are the people who live here, and most of them know better than to stand up at Town Meeting and ask if maybe the road crew shouldn’t “try thinking outside the box this Mud Season.” The only thing better than the mud this time of year (and the entertainment provided by those who think something can be done about it) is that the maple trees begin to wake up, the sap flows and the arch is fired up on Bobo’s Mountain. 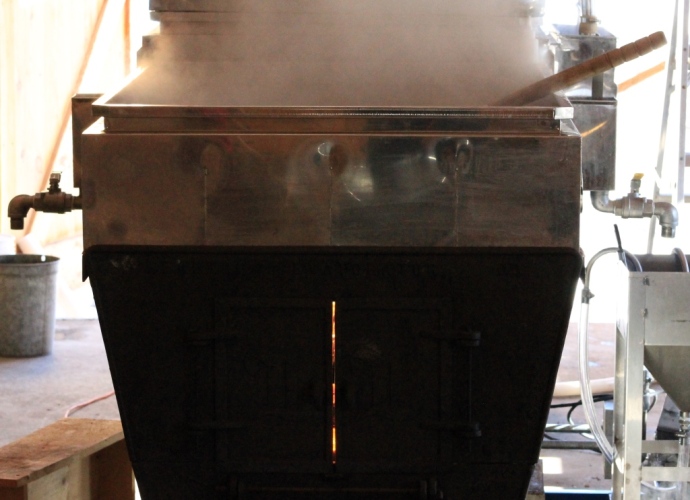 A quick two-day thaw brought a 2,000-gallon run of sap and a drop in temperatures brought it to an end, meaning that the first boil of 2015 could be a shake-down affair, without the pressure of 2500 trees gushing all day and having to boil like hell just to keep up. 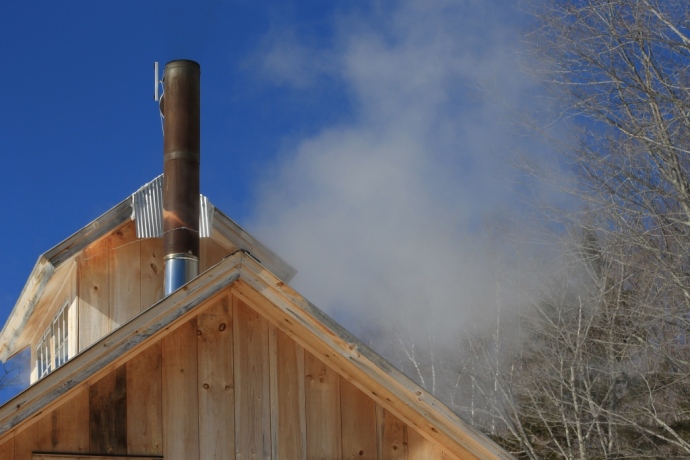 As often happens, 40 gallons of sap did not equal one gallon of syrup but this particular batch of syrup tastes like it’s already on pancakes, with as much melted butter as you wish you could really have and, like the best rum, coffee or beer, you can’t shine a light through it. Whether or not it tastes so good because it’s the first syrup of the season, after a winter when I almost kicked a lady wearing yoga pants (are those things supposed to blouse?), I don’t know, but I do know that mud and maple go together and, if the first thaw of March is any indication, there’s going to be plenty of both. After months of challenging cold and snow, the Shack Nasties have loosened their grip and slipped away at last. Dirt roads turn to mud, sap becomes syrup, and Quill Gordon loses all desire to kick people in line at the grocery store, transforming from snarling sociopath to just another good-natured goof driving home in the dark, bouncing over frozen ruts beneath the stars, clutching a warm jar of fresh syrup, the surest signs of spring I know.

There is still some lovely 2014 “Amber/Rich” syrup available from Bobo’s, for those who need a fix now and wish to avoid the muddy drive over, but it won’t be long before those empty barrels are filled with this spring’s sugary goodness, ready to be bottled and shipped to far-flung corners of the world. While waiting for the next sap run and boil, as folks in these parts struggle to stay out of the ditches, here’s an official Bobo’s Mountain Sugar video to watch. Notice how just talking about syrup is enough to make some people smile.

No one tells me what I should or should not eat, I don't care how many languages they use! #donoteat #foodsafety #quillgordon
@farnumhillciders Photos of photos from a long time ago. Steve Wood always said it was important to prune trees so the most good was done with the fewest cuts. Making way for cider apples, 1990-ish. #farnumhillciders #appletrees #pruning #povertylaneorchards #whoisthatskinnyguy #quillgordon
In addition to delicious maple syrup, @bobosmountainsugar now also produces electricity! 🌞Kind of like photosynthesis, only different. #vermont #solar #greenenergy #westonvt #maplesyrup #quillgordon
So, I was staring at green grass, the way one hardly ever does in Vermont in January... #vermont #winter #toowarm #westonvt #quillgordon
A bit breezy on top of the hill today... #vermont # westonvt #windy #quillgordon
So, I was staring at frost, the way one does from time to time... #vermont #winter #frost #moon #quillgordon #macro #olympustg4