Everyone is anxious in spring, wondering when the ice will be gone, but I don’t field many inquires as to the time of its first appearance. The ones I do are often followed by, “But isn’t that early? or, “But isn’t that late?” or some such other nonsense.

Fish in a Barrel Pond, November 18

As much as we’d like order in our world, if for no reason other than ease of scheduling, lake ice just doesn’t work that way. Like many natural processes, it is complex and involves things you can’t pencil in on a calendar — like chemistry, thermodynamics, and non-dimensional, unitless quantifications of solar energy reflection.

The ice can appear in a matter of hours, huge feathery crystals merging to form a cohesive sheet under cover of darkness on a still, frigid night; a steady Arctic blow can whip up a sea of frozen froth over the course of a couple of days; or, as has been the case this year, a thin skim in one corner spreads and grows, gaining more ground each night than it lost the day before.

Springs, rocks, and current from the feeder streams to the spillway affect the ice from below, it cracks under its own weight, weak spots form, and venturing out is a dicey proposition. Even later in winter, beneath an insulating blanket of heavy snow, those seeps are hidden hazards that can catch the fool-hardy unaware.

It is an unusual winter that allows the ice on Fish in a Barrel Pond to approach what a sane person might consider safe. When it does, it offers a view of life (and death) in winter that would normally be missed, as documented in a post from 2012 called “A Story of Life and Death, Written in Snow.” 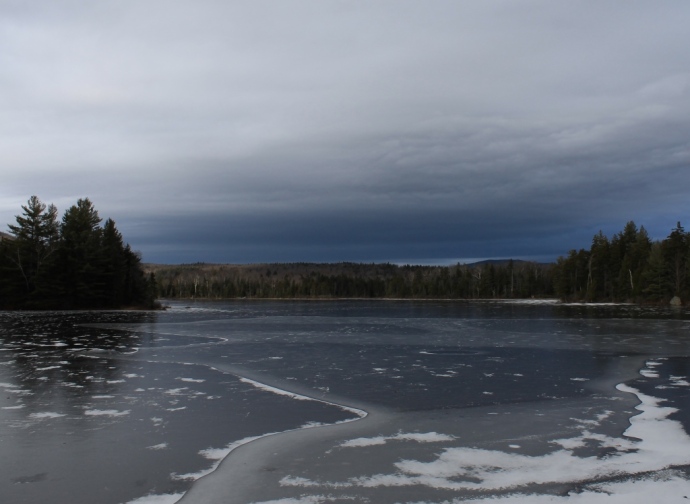 A warm spell and a little rain acts as nature’s Zamboni, leveling the surface and promising a fine polish when the cold returns — unless, of course, what’s frozen thaws in the meantime and the whole process has to start over again.

She’s going to freeze, of that there is no doubt; the big question now is how long it will last. 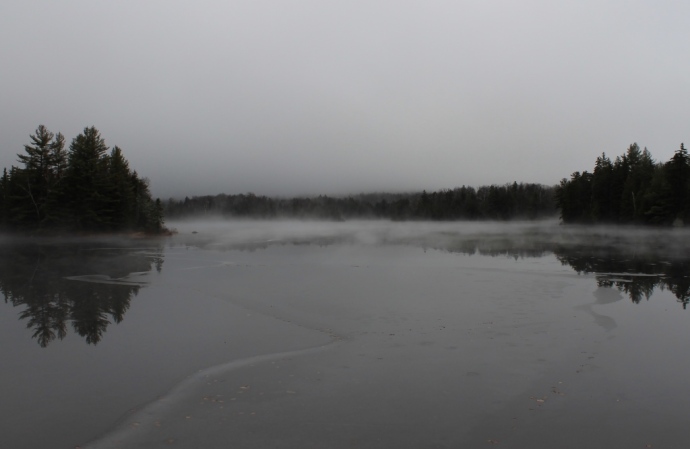 One thought on “Closing Up”

#vermont #westonvt #icicles #sunset #nature
Ice, oddly fortified by a thaw. A thaw? A thaw! It's almost mud season...
I miss the "Take it or Leave it" room at the transfer station. I once found some shoes there that almost matched and very nearly fit!
#vermont #westonvt #winter #snowflakes #nature #macro #photography
Group portrait.
Disappearing without a drip.