The Cremation of MMXIII

(To the delight of some and the consternation of others, this is not Part II of our tribute to Forgotten Fly Fishing Legend Little Dickie Conroy. That particular dispatch will appear shortly, just as soon as our top-notch research staff has finished  reviewing source materials.)

A symbolic bonfire is an appropriate and sometimes exciting way to bid farewell and good riddance to the old year. It can also extend a warm welcome to the new year and serve to celebrate the gradual lengthening of days in the midst of a long winter slog. A spontaneous attempt was made to light such a fire three weeks ago, using a very large pile of brush, which was crusted with ice and covered in snow. Despite the use of various accelerants, the effort had to be abandoned and, while someone might have had a good chuckle at the time, someone else came out of the deal with nothing more to show than some ironic burn-holes in his raincoat and a hat that smelled like diesel fuel.

Symbolic, perhaps, but not what we would consider appropriate.

Several attempts since have yielded similar results but we’re sure to get a good one going sooner or later to serve as the symbolic cremation of MMXIII. In the meantime, here is a photo of a fire from a previous post, “The Cremation of MMX” (rest assured that the surprised-looking man in the foreground had no hair to begin with and was just fine):

For the purposes of this post, the fire will be metaphorical, and the brush to be burned is a few things found laying around in the form of notes and half-started nonsense. This should lessen the chances of someone flapping and running, chased by a ribbon of flame, while everyone else hollers, “Drop the can!

Once again, Fly Rod and Reel Magazine published their annual “Best Fly Fishing Jobs” feature and, once again, the editors saw fit to not include Fishing Camp Caretaker in their list of Dream Jobs for People Who Fish.

We here at The View from Fish in a Barrel Pond have come to agree with that decision. Setting one’s sights too high too soon is bound to lead to career disappointment, and we feel one should start with something easy like preparing gourmet helicopter fishing breakfasts or taking a position as a CEO, consultant or manager before jumping into the glamorous world of septic filters and stemware shortages. Besides, there aren’t that many openings for Fishing Camp Caretakers and this particular position is filled for two more years as Quill Gordon and the Neverwas Nonesuch Angling Society continue to find each other at least mutually tolerable.

Two families from somewhere else rented a house up the hill last summer. They were only in the neighborhood for two weeks but, because they behaved just the way you’d imagine if I told you where they were from, it was a long two weeks.

Shortly after lunch that very same day, I met the husbands, evidently done with golf. Cutting to the chase, they spoke past clenched cigars, insisting that if they gave me money they could fish. As politely as possible, I explained that they could not fish this water, even if they gave me money and even if it looked like no one was around. They were insistent but I was resistant and they finally drove away, muttering around their stogies.

I like to think that most everyone at least gets a story to tell after a run-in with me (see Quill Gordon and the Nonesuch Mountain Howler), but if those two couples got theirs they weren’t sharing. Not with the kids, anyway. The kids, however, shared their story later that day, but like I told the wives the next morning, I don’t know where teenagers are supposed to go drink their beers. I just know it’s not here.

None of that is the point of this. It just sets the tone for the way things are around here sometimes. 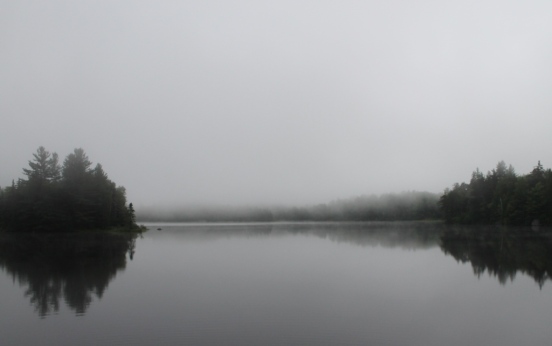 The point is that one of the aforementioned wives liked to “jog” from their rental to my mailbox and back, in the early morning, singing along with music playing through her ear-buds. Even without knowing the songs she sang, I could tell she was off-key and I’m no musician, so don’t quote me on this, but I’m fairly certain the key in which she sang doesn’t exist.

I am only assuming she actually wore ear-buds and wasn’t just free-styling, but the problem may have been that, with the music blaring so loud in her ears, she couldn’t hear herself sing. We’ll never know but, with the ear-buds out (or maybe just the volume turned way down), she might have had the voice of an angel. She also might have sung more quietly. Audible from three quarters of a mile away, it took fifteen minutes for her to shuffle to a slow crescendo in front of the house and another twenty to fade away as she slowed down on the uphill going back, hollering the whole way about her awesome god.

Shortly after those nice folks went home to the suburbs and the woodland creatures returned, I picked up a copy of Haunted by Waters: Fly Fishing in North American Literature by Mark Browning (1998) and came across this quote:

“… every book about fishing ever published is materially a book singing its praise, however poorly or well the author sings the song. The songs of angling praise are few in number, but they come in countless thousands with different words to the same beguiling tunes” (Bryn Hammond)

This after commenting on the hundreds, even thousands, of fly fishing books available at the time, including a whopping 400 new titles added to the Library of Congress in the 21 years since 1977. 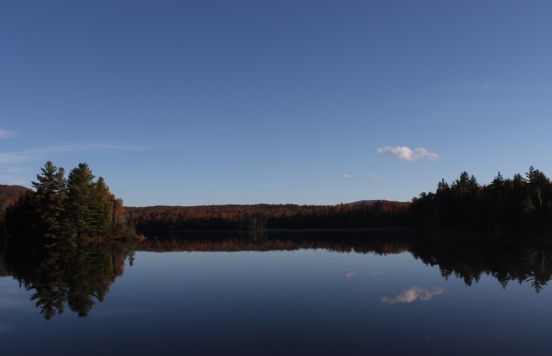 Fast forward to the future in which we now live and not only has the number of fly fishing titles in print exploded, but the number of independent, self-published authors and bloggers around our planet is mind-boggling (There are 375 fly fishing blogs listed on the Outdoor Blogger Network alone). Add in the cacophony of all the other stuff that now fills our lives and it can seem sometimes that there’s too much noise to hear oneself sing. A figurative yanking of the ear-buds could be one way of explaining to those who need explanations why Quill Gordon and The View from Fish in a Barrel Pond go dormant from time to time.

That might not actually be the whole truth (Quill Gordon is a bit of a recluse), but it is kind of poetic and I finally got that lady from somewhere else out of the way. Two things, however, still bother me about her: I never figured out if the visor was to keep her wig in place or if it was a single wig-and-visor unit; and is Spandex supposed to blouse?

I read some articles and blog posts at the turning of the year, by people who had resolved to “unplug” and give up their little electronic communication devices for a period of time. Some wrote as if they’d just crossed a wilderness, others like they’d been on some aboriginal vision-quest. A few considered it a lark, like a camping trip, but a couple of them shook in the corner like junkies. I learned there are “boot camps” to help enforce this self-imposed deprivation for people like them (starting at $450 for a weekend). Everyone involved ultimately felt transformed by what they’d been through and claimed they’d never look at their devices the same way again, but I got the feeling most of them were right back to their old thumb-typing selves within an hour or so.

The important thing is that they tried. As a believer in the benefits of unplugging, I would like to help others succeed and, beginning on Opening Day 2014, members of the Neverwas Nonesuch Angling Society (and their guests) will be able to take advantage of a new (a la carte) service here at Fish in a Barrel Pond. For a limited-time introductory fee of just $25, the afflicted can hand their device to me on arrival and I will not give it back until they are leaving, no matter what.

Also available, our “Help a Friend” program where, for $99, I will remove a device from the hand of any other designated individual . Some conditions may apply.

We here at Fish in a Barrel Pond will grant that unplugging increases the chances that one might miss something important happening right this instant, and while we heartily recommend digital silence in large doses, we also grant that nearly two months of quiet might be a bit much.

As we begin our mid-winter poking around through other people’s stuff, we’re finding too many posts (most of them old news by the time we got there) regarding heart attacks and surgeries, re-locations and illnesses. We are glad to see positive outcomes but jeezum crow, people! Knock it off. Get better, get settled, but knock it off. We have a hard enough time keeping up with that Beiber girl and that Lady Gaga dude.

Dropping the can now.

Best wishes to all in MMXIV.

17 thoughts on “The Cremation of MMXIII”