Drunks Running Around in the Dark

Everyone knows Quill Gordon wears steel-toed drinking shoes and even a helmet from time to time. That said, he is not one of the drunks in the title of this post.

Shortly past 2:00 a.m. one late-September night, I woke up to the sound of what I took to be screaming outside. Dashing to the open window I saw, beneath the waning gibbous moon, a figure staggering about and whooping it up for all he was worth. While 2:00 a.m. might be the time, my dooryard is not the place for such drunken antics and I became consumed by the desire to put an end to his nonsense immediately.

Crashing into the frame of the bedroom door while pulling on some pants delayed me for just a minute or so (I think) but from there it was clear sailing as I made my way outside to give that booze hound a piece of my somewhat foggy mind. He was tricky, though, and ran to the other side of the house so I ran back indoors to the living room, where I banged on the windows and shouted obscenities as he ran by. I thought to cut him off at the porch as he made it around for a second circuit but he headed for the draw, where he hid in a thicket of willows and barked unintelligible nonsense at me while I threw rocks.

A friend of his was behind the barn, calling to him, and I figured the game was over when they gleefully made their way across the field and into the woods. In the silence that followed I looked up and saw Orion and the Pleiades, the winter sky on a warm fall night, and as I breathed in the spicy scent of apples from the orchard out back I heard geese overhead, headed south in the dark.

Suddenly sad, but still quite angry, I sat inside with the lights off, having a smoke at the breakfast table, next to another open window, enjoying the quiet while it lasted, which turned out to be less than five minutes, that being the amount of time it took my besotted friend to make the loop through the woods and back down the road to the darkened window beside which I sat.

He announced his presence loudly, with an ear-piercing scream, and ran around the house twice while I threw on my boots and gave chase, this time armed with a gun. It was all I could do to keep him in the beam of my million candle-power spot light, let alone draw a bead on him, so after a few hundred yards I gave up and disentangled myself from the thick patch of brambles and pucker brush he’d led me into.

Sad, angry, and now bleeding, I sat in the dark again, hoping we were done for the night, but we were not. Like the guy who gets kicked out of a bar but keeps coming back, he returned and, like the bouncer who finally decides to just knock the guy out, I gave chase for the third time that night, never even getting close, but managing to make my way back to bed just before 4:00.

So, who was this drunken fool running around in the dark, and just what was his problem? I had a theory, along with a game camera, and the next night I put both to work, capturing this image of the culprit in the orchard out back: 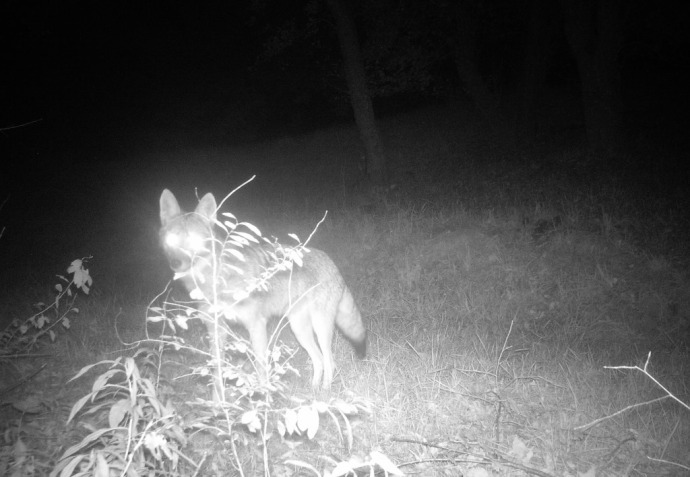 It’s a coyote. He has been eating fallen apples, many of which have begun to decay and ferment. Now he is drunk and probably looking for trouble, but he is not alone out there and I am evidently not alone in having had enough of his intoxicated shenanigans. The next image recorded by the camera, thirty seconds later, is blurred by the action but the picture (to me) is clear. 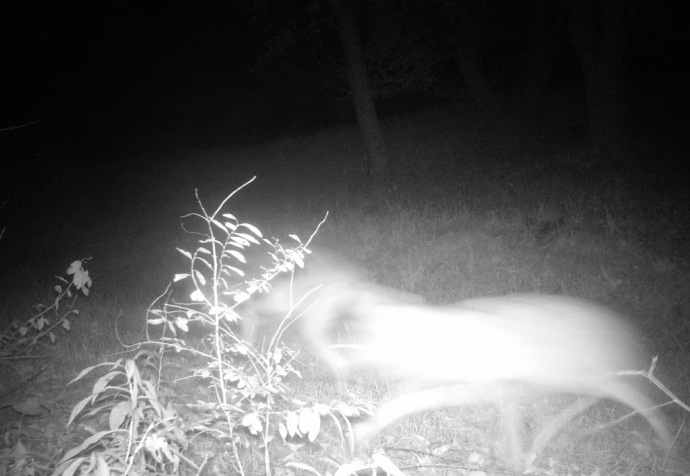 POW! Something has come racing in from the right and it sure looks to me like whatever it is has crashed into the coyote, who is now facing away with his butt in the air. To my eyes, it doesn’t look like another coyote. The arched back and the shape of those legs, blurry though they may be, look like something very different, as confirmed in the next image, captured just moments afterward. 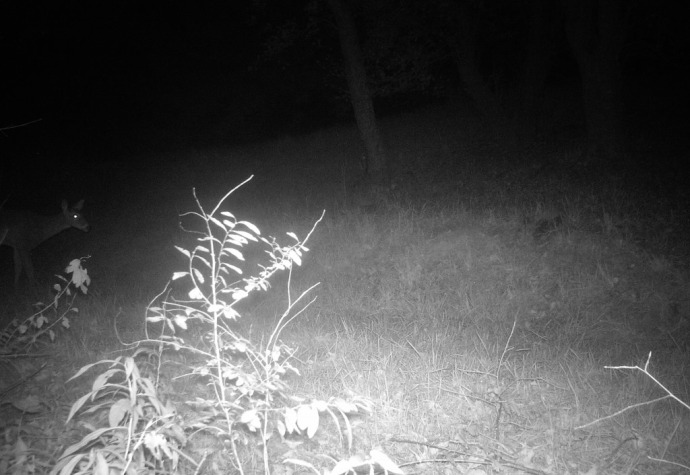 There, coming back into the picture from the left, is a deer. Evidently, a drunk deer, also on an apple binge. Whether the deer was just fed up with the coyote’s antics, wanted the rotting apples all to itself, or was plain feeling mean, is anyone’s guess. It’s a crazy world out there.

I apologize if anyone thought for a moment the drunk I was chasing might have been a fly angler having a little toot, but you should know better. For one thing, this is The View from Fish in a Barrel Pond, where things are rarely what they first seem to be and, for another, no story involving the anglers of Fish in a Barrel Pond would ever begin, “Shortly after 2:00 a.m. …” Eleven-thirty, maybe, midnight, tops, but certainly not 2:00 a.m. They are fly anglers, after all.

8 thoughts on “Drunks Running Around in the Dark”

Ghost plants (Monotropa uniflora). After a dry spell, a good rain gets things going in the woods. Ghost plants don't use sunlight to make chlorophyll; instead, they get their energy and nutrients by being parasites of certain fungi that feed on tree roots (generally beech), making them parasites of parasites. Seeing ghost plants means the late summer 'shrooms are on their way.
Some flowers close to home: 1) morning glories; 2) white mallow; 3) day lilies and touch-me-nots; 4) you know; 5) tomato; 6) daisies
Dog day sunset
It's Tomato Time!
Still trying to understand this whole taking pictures with a phone thing.