I Hear the Fishing’s Been Pretty Good

Winter’s stark grays softened beneath a gauzy green veil as spring returned to the slopes of Nonesuch Mountain. A last toast to winter drained the dregs of that bitter keg so I took up the cup of spring with a nod to the transition of season, acknowledging an important milestone along our planet’s annual journey around the sun. I lifted the vernal chalice to my lips as for a kiss, and imbibed the essence of the season with intemperate relish as spring flowed like syrup, at its own leisurely pace.

Another cup appeared, brimming with the prospect of the return of anglers to Fish in a Barrel Pond, top shelf stuff, and you know I simply couldn’t resist. But I took a wide stance and held onto my hat as I quaffed because, Dear Readers, drinking from that vessel is like drinking from a damn fire hose.

Two clocks ticked. One counted down to ice-out, which simply happens when it happens, the other counted down to Opening Day, which, by the rules of the Neverwas Nonesuch Angling Society, is the last Saturday in April. Always has been and always will be. There is not a thing I can do about ice-out but I returned the phone calls anyway, trying to sound folksy in hopes of seeming profound and offering assurances that the ice would be gone by the time Opening Day rolled around.

Ten days out, water flowed through the lines to all but one of the camps. Some of them even had water that was hot. A group of dedicated volunteers spent the blustery Saturday before opening swatting at cobwebs and evicting woodland creatures from beneath the beds, which was a tremendous help with less than a week to go, but when the phone started ringing again on Monday no one was interested in exciting tales involving possums and dust pans or weasels and brooms. All anyone wanted to know was if the ice would be gone by the weekend.

On Tuesday, nobody wanted to hear how the needle on the water meter kept spinning even though every spigot in the place was closed. They only wanted to know if they’d be able to fish on Saturday and had absolutely no interest in the the highly scientific method used to find the leak in a buried line, which is too bad because sinkhole formation can be quite fascinating.

Three cheers for a tanned, handsome man named Dale with an excavator and a few hours available to help make things right.

No one asked if the transformer by the road hummed and lights in the valley went brown when the toaster in the Parmachene Belle was plugged in. They didn’t care if the lights went out, just as long as the ice did, and they wanted me to tell them when, exactly, that would be. Never mind the fact that if I could make predictions like that I wouldn’t be doing what I do for a living but, thanks to two electricians named Mike and Bruce, the Parmachene Belle did not burst into flames.

One would think there might be some value to the story of my struggle to remove a blown water heater element in the Cahill but all anyone wanted to know was the condition of the ice on the lake. They did not want to hear how a standard element wrench didn’t do the trick, even when I muckled onto it with the largest slip-joint pliers I own and I never even got to tell the part where I took a hammer and swung it at the pliers, methodically smashing each finger on my left hand, one at a time. As long as the ice would be gone on Saturday it didn’t matter that I had to call in a team of experts with the experience and the know-how to remove a heating element that had been over-tightened more than ten years ago and was firmly fused into place. Using a pipe wrench so gigantic I thought at first it must be a joke, they said they just had to show the offending element “a little love” but it sounded a lot like cussing from where I stood, outside, helpfully staying out of the way.

The edges eventually gave way and the ice sheet was able to move slowly back and forth, pushed by the breeze. At noon on the Wednesday before Opening Day the frozen mass broke apart and by 2:30 the call of a loon was again heard on the lake.

Transported by an ice floe, this large branch is now out there, somewhere, either providing shelter and food for aquatic life or creating a darn fly-snagging menace, depending on how you look at it.

By evening, the ice was gone. 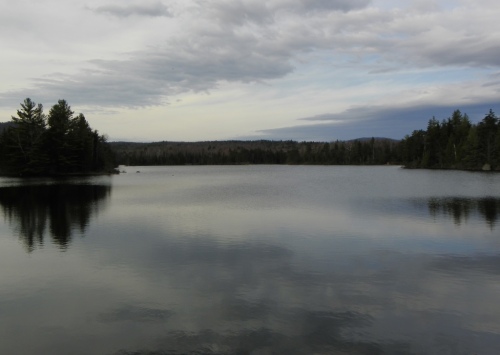 The boats were launched Friday morning and by nightfall the camps were full of anxious anglers. The tangy scent of wood fires wafted from the chimneys and laughter echoed across the lake, punctuated every now and then by the screech of a smoke alarm as the aromas of gourmet camp cooking filled the air.

The next morning, as they have done for more than 100 years, the members of the Neverwas Nonesuch Angling Society gathered at the lodge and waited for the first ray of sun to strike the summit of Nonesuch Mountain. Bless their hearts, it was cloudy so the sun did not shine, and who knows how long some of them would have stood there discussing what to do if someone hadn’t finally hollered, “Shut up and fish!”

And fish they did, all day long.

That evening, gathered around the old stone fireplace in the lodge, new rivalries and friendships formed while old ones were renewed but the general consensus was that it had been a fine opening to yet another season at Fish in a Barrel Pond. No one was electrocuted making breakfast, the lights stayed on, and hot showers were available for the three people who chose to bathe during their stay. The boats remained afloat (for the most part), the docks stayed in place, and all facilities functioned more or less as intended. The drains drained and the toilets flushed, the wood stoves gave off heat, and nobody reported being attacked in their sleep by creatures from beneath the beds, so I sat back, exhausted but pleased, and listened as I heard again and again, what a good thing it was that the ice went out when it did.

The month of May has come and gone and another season is underway at Fish in a Barrel Pond. At least one camp has been occupied every night but three, so far. The grass needs mowing, the wood bins need restocking and rolls of toilet paper arrive at my door in cases of 80. New projects appear on the list of a thousand things to do when time allows, while day-to-day operations consume nearly every waking hour. They come, they fish, they leave, and I pick up the pieces before the next batch of anglers arrives, just as others have done here for more than 100 years, although it’s a good bet that in the old days men peed outside, on the ground, not inside, on the floor, and that my early predecessors spent a lot less time pushing a mop.

I’m just as happy as the next guy that the ice went out, just in time, although there are days it seems it couldn’t possibly return soon enough, but I hear the fishing’s been pretty good …

(Reports have surfaced of strange noises and odd sightings in the area over the past month or so. These claims have been thoroughly investigated by a team of experts in such things and, once more, no conclusive evidence has been found to disprove the existence of the Nonesuch Mountain Howler. The search continues.)

13 thoughts on “I Hear the Fishing’s Been Pretty Good”