Opening Day is Three Days Away

Each year, the week before opening day, I take my list of things to be done around Fish in a Barrel Pond and make a little schedule. I carefully find a block of time for each of the 4,000 things to be done — an hour here for this job, two hours there for that, completing each task as quickly and efficiently as possible — and when I am done I feel like the most organized and disciplined man in the world.

I then take that schedule and tear it into tiny pieces before the gods of such things have a chance to laugh at my plans. They will find plenty to laugh at in the days ahead. 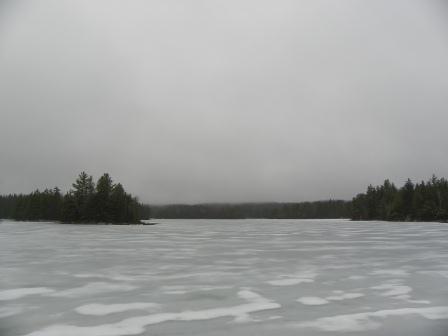 First-aid kits and kindling, blankets and pillows, soap and towels, emergency lights and new martini glasses have been distributed to the camps. Cob webs have been vacuumed and as many critters as possible have been chased out from under the beds and, no matter the conditions on the lake, I prepare for opening like I really believe the ice will go away and on Saturday there will once again be open water, anglers and trout. 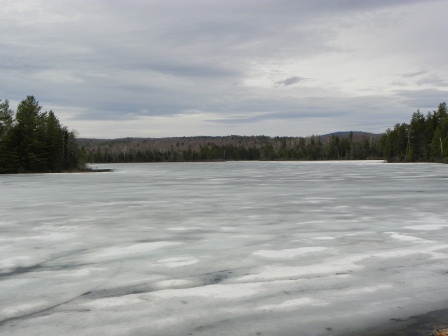 I never know if I will have two weeks or two days to get this old fishing camp up and running so I try to get a small jump on things, clearing the roads to the camps as early as possible, but muddy drives along the lake shore do not a fishing camp make. Some members of the Neverwas Nonesuch Angling Society remember (and rue) the day the first shower was installed up here, making things a bit more comfortable but encouraging visits by women and children. These days, there is a shower in every camp — with hot water, no less — but until the deep frost leaves the ground no water at all can reach the camps. This year I got the water flowing on Monday. By late yesterday afternoon most of it was flowing where I wanted and some of it was even hot. 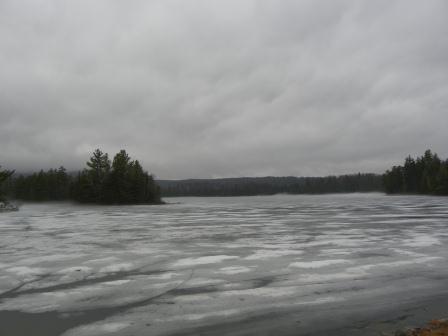 The docks all need work after spending the winter encased in ice and buried beneath deep snow but nothing can be done until the ice is off the lake and I can actually get in the water with them. There are plenty of details to keep me busy until that happens but there is nothing like knowing a few hours of cold, wet work are being saved for the last possible minute. Once the docks are repaired and in place we can launch the boats. Assuming, of course, the ice goes out in time. 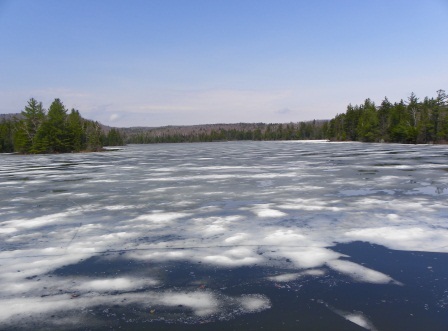 The changes this week have been dramatic, even without all my running around, bringing the camps and facilities back to life. While I was crawling around in the cold, wet space beneath one camp yesterday, reconnecting water lines and banging floor joists with my head, the first wood frogs were making their way to nearby vernal pools and wet spots, croaking out froggy songs and looking for love. This morning, at 3:00 a.m., a single spring peeper was sounding off, heard through an open bedroom window (!) an hour before the newly returned song birds launched into their infernal dawn chorus.

There is no denying the return of spring, in spite of the six inches of wet, heavy snow that fell last Saturday. The signs are everywhere. Some are subtle, like the greening of the grass, quietly sneaking in around the edges, making me blink and wonder if I can believe my eyes after seven months of dark, cold, challenging winter. Other signs are more obvious but after so much time doubting they would ever return they seem at first to be hallucinations or dimly remembered dreams.

A seam of open water appeared across the north end of the lake yesterday afternoon, a glimmering strip of hope and warm things to come and I imagined I saw the rises of trout when I went up to check it out. Maybe I did, maybe I didn’t, but there was no denying what I did see, even after shaking my head and rubbing my eyes. Less than an hour after that water opened up, there they were — back from their winter home along the coast — our resident pair of loons! 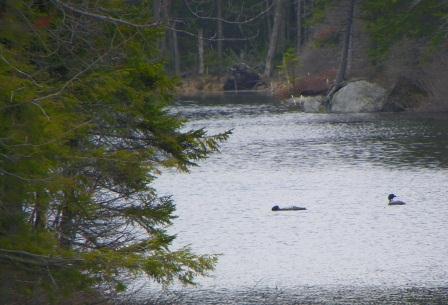 Right now, couple dozen anglers are gathering their gear and packing their bags, ready to make the trip to Fish in a Barrel Pond for opening day this coming Saturday. The ice will be gone, the camps will be clean, well-lighted and warm, and when they hit the water for the first fish of 2011 I will be where I usually am on opening day, more than likely unclogging a toilet and watching other guys fish. 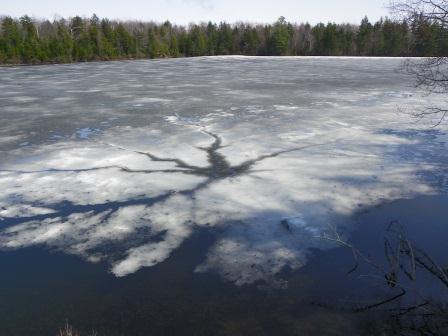 I can hardly wait!

3 thoughts on “Opening Day is Three Days Away”