A Walk in the Woods

There are times when any opening in the trees seems as good as another but things are not always as they seem. There is a trail around Fish in a Barrel Pond and, no matter how many times I tromp it down, regular snow-fall fills it back in. If it was only me using the trail, I wouldn’t worry about keeping it open, but it is not so I do. Some members of the Neverwas Nonesuch Angling Society like to get out once in a while, and when two of them came up last week I told them I hadn’t been out since the last big snow but they said it wasn’t a problem; they knew the way and they would be happy to break the trail for me.

They returned from their two hour walk five hours later and insisted I thank them for packing down such a nice path for everyone to follow. Sight unseen, I did, but when I went out the next day I took it back and stopped following their tracks where they crossed a barbed-wire fence and headed into the swamp below Peavy Flat. I still have no idea where or how they got back on the property, but I can’t have people wandering off into swamps in the middle of winter so I spent the weekend breaking trail through deep snow, carefully marking the way with lime green surveyor’s tape as I went.

There were some surprises along the way, things one would never expect to find in late January, hard on the heels of a twenty below zero cold snap. The clock is ticking, the sun rides higher in the sky, setting later each day, and even with another storm on the way (as well as more arctic air) there are signs that the worst of winter is behind us. 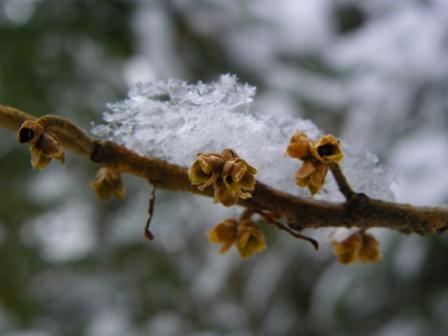 A tree I still haven’t identified is blooming in the chill. Confirmation that this is not some freak, random mis-fire by one isolated plant comes when I notice that Weather Underground has begun including Pollen Counts in its air quality section. ( 02/01/11 – Thanks to Brenda, I now know this to be a witch hazel. Brenda has provided a link with more information in the comments below. ~QG)

Even the viburnum look to be ahead of schedule. In the midst of meteorological winter (the on-average coldest 90 days of the year) and seven weeks away from the Vernal Equinox, it seems odd to find buds and blooms in the dark, cold woods but there they are. It won’t be long before the snow fleas are out, followed by the return of the peepers, wood frogs and red winged blackbirds trilling in the willows. But let’s not get ahead of ourselves; winter ain’t done with us yet. 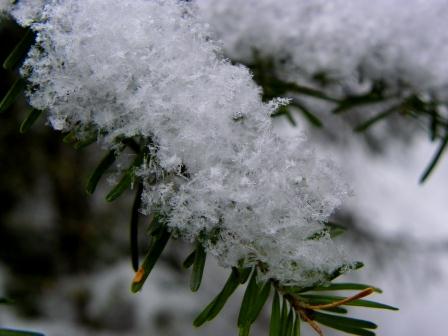 Other than the occasional tap-tap of a woodpecker, the woods are nearly silent. The streams that feed Fish in a Barrel Pond still flow beneath a mantle of ice and following one of them deep into the forest brings me to a place ice never forms — the headwaters of the Neverwas River, high on the slopes of Nonesuch Mountain. 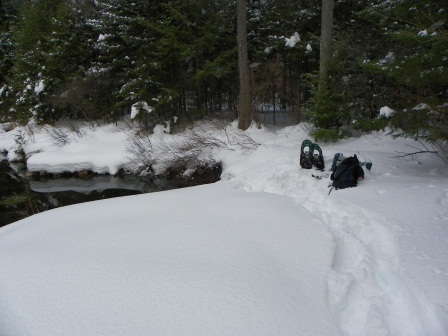 There’s a bench back there and, after digging it out, I like to pause and take a break from the work of breaking the trail. Even on a cold January day midges take wing, launching themselves into the chill air. Some are immediately crippled, their delicate, damp wings frozen stiff, and I find them crawling on the snow, trying to make their way back to the water. Others manage to do what midges do, mating no matter the weather. They and their offspring also provide nice mid-winter snacks for the dace and the brook trout that make the trip up from the lake from time to time.

Snowshoes are the only way to travel through these thick woods in deep snow. I enjoy getting out this time of year and I am glad to open a safe sensible trail for others to follow. It has been said that snowshoes make the impossible difficult and I find this to be true. Without my snowshoes, there would be no way to do this: 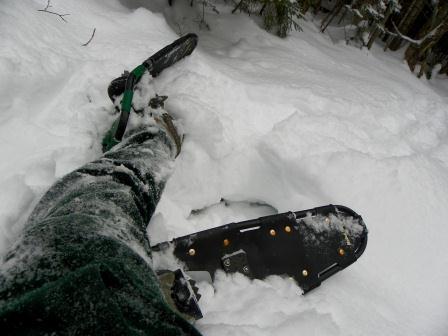 4 thoughts on “A Walk in the Woods”