Where the Hell is Quill Gordon?

The transition from snowbound no-man’s land to lively, functioning, family fishing camp took place quickly this year at Fish in a Barrel Pond. It did not happen in the blink of an eye, or even overnight, but it happened fast, the rapid progress seeming even more so because of the tremendous amounts of ice and snow remaining at the beginning of the month. Small patches of ice remain, tucked up against the north sides of buildings, and snow can still be found in some shady, deep-wood recesses, but no other vestiges of winter are seen.

Spring won out after a final battle that included snowflakes the size of silver dollars and lightning that lit up the night with white-hot intensity, erasing all color as it reflected off clouds above and deep snow below. Cold rain began to fall, freezing at night, gluing particles together and changing the texture of the old snow from fine to coarse, eventually creating ice balls the size of marbles that pressed themselves together under their own weight into a mass that resembled a glacier.

Temperatures hovered just above freezing for a few days and nights, turning trickles into rivulets, and the melt was on. The air was filled with the scents of an awakening world and also with a sense of relaxation as the deepening thaw set in.

There is a saying in New England that you should stick to your long-johns until your long-johns stick to you, and the first chilly morning without them is both a a shock and a pleasure. Each successive day is easier to take and a bit more normal than marvelous but some people, like my friend Eugene, can have a hard time making an easy transition. One particularly cold winter, not too long ago, Eugene wore his long-johns morning, noon and night from the first week of deer season to the second week of spring turkey season. It seemed like a good idea at the time, to wear them in the tub and combine bath night and laundry day into one weekly event, but the hair on his chest, arms and legs grew through the mesh and he was forced to whittle away at the tangled mess, bit by bit, until nearly the 4th of July.

Temperatures soared into the 70s at mid-month but, even as our deep snow pack melted, the ice on the pond remained. It was weak but thick and there was nothing to do but hope it would go out in time, which was just as well because there were plenty of other things to do to get ready for opening day.

Most materials have a certain, useful lifetime and the PVC pipes carrying water through the cottages is no exception. It has turned brittle with age and its useful life is done. Break after break was discovered and repaired, so many, in fact, that some sections of pipe have so many patches that they merely occupy the same space as the original pipe. It was close, but water eventually reached every sink, tap and toilet on the property.

I was not the only one out plugging leaks while the snow melted. Unable to stand the sound of running water, beavers went back to work, shoving logs, sticks and mud into the culvert pipes I worked so hard last fall and winter to keep clear.

The next person I hear call beavers “nature’s little engineers” will be slapped. Random sticks and twigs with a bunch of mud and other stuff on top does not make me think of engineering at all. It makes me think of how I’d rather be someplace other than up to my waist in cold water (even with waders on it is cold) pulling a bunch of muck from my culvert pipes.

To make this long story a bit shorter, the roads to the furthest camps were finally cleared of snow on the 21st.

The ice on the pond disappeared quietly the night of the 24th. 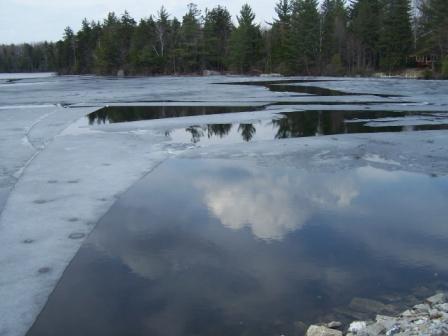 And, just before sunrise on the 26th, after six months of solitude, I stood on the main boat dock, in front of 20 eager members of the Neverwas Nonesuch Angling Society, and shouted the magic words, “SHUT UP AND FISH!” 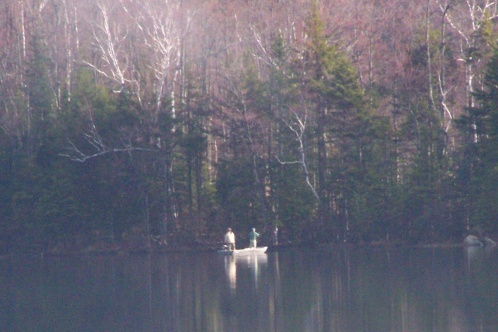 12 thoughts on “Where the Hell is Quill Gordon?”