Flashback Friday: Got a Light? 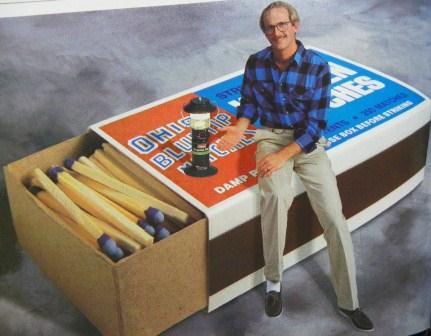 I sometimes carry a pipe in the evening, puffing on some Captain Black when the mosquitoes are particularly aggressive. Some evenings are just not complete without a nice cigar but smoking no longer holds the allure it once did. There was a time, though, when (male) anglers were almost expected to smoke and the image of an angler with a pipe in his mouth became darn near iconic.

I have never quite figured these two out but the guy with the rod has a pipe so he must be cool. Pretty clever, using a guy with a fly rod and a pipe to sell safari suits. And just look at the size of his fly!

The Bantamac “Umbrella Jacket” was “more than a fine spectator jacket.” Rugged and capable of keeping you “warm as a campfire,” it offered protection on the water or on the links. Again, the pipe is an integral part of the image.

Somewhere along the line, pipes became less popular and common, as anglers (or at least the ads targeting them) switched over to the much cleaner, healthier and convenient smoking of cigarettes. 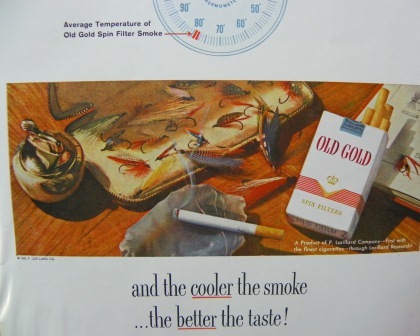 Cigars are the more common smoke of choice today, at least among the anglers of Fish in a Barrel Pond (not, of course, if I am asked by their wives) but, no matter what guys chose to smoke through the years, they had to light it on fire first and, as with all things an angler might desire, someone was there to make sure he could have it.

The Zippo has been providing reliable service and dependable flames for years.

The Beattie Jet Flame lighter had a “conventional” flame for cigars and cigarettes, but when tilted slightly it shot out a hot jet of flame for pipes and many other unspecified “plus-uses”. 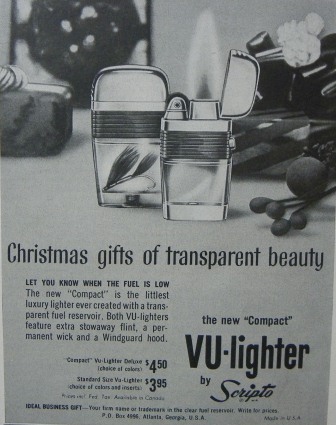 But who says you can’t have both function and style? The VU-lighter by Scripto filled the bill, with a choice of colors and insert options, including one with a real hand-tied fly in the reservoir.

There it was, in a tray of old bottle openers and Hot Wheels cars and I had to have it. I only have one, so it’s not like I collect them. It takes at least three of something to be a collection. Give me a few months.

6 thoughts on “Flashback Friday: Got a Light?”

Luna moth (Actius luna) on slate. Luna moths are giant silk moths and this is their breeding time. Females sit in birch trees, emit pheromones, and wait for the males, who may be busy being distracted by porch lights, to find them. Adults don't have mouth parts and so don't eat, but their larvae (caterpillars) eat lots of leaves. The larvae also make noise by clicking their serrated mandibles together to warn away predators. If that doesn't work, the larvae will regurgitate their intestinal contents (puke), which is confirmed as "having a deterrent effect on variety of predators". If nothing else, Luna moths will always give you a way to work caterpillar puke into a conversation!
"Wiggle wire" is what holds the tomato house cover in place. Hooray for the crew that got it done this morning, before the wind started!
Sometimes I shudder to think of the terrible things that could happen if I didn't find a couple of these every week.
A group of butterflies is called a kaleidoscope or, sometimes, a flutter and these swallowtails are engaged in an activity called puddling. Mostly males, they have gathered around a damp spot and are extracting minerals which will be passed on to their mates, providing extra nutrition for eggs and the tiny caterpillars that hatch. Another reason to drive carefully on dirt roads.
I was going to post this four-leaf clover the other day, with a note about how they don't really work but, when I went to do so, the internet was down and stayed down all day. So, maybe they do work, but only once and only for a while.
Look up "Norm Macdonald turtle joke".