Flashback Friday: Sharing the Memories, Not the Now

That’s a lot of sharing.

Digital technology has become cheap and easy, as has much of the entertainment it provides, coming at us faster and faster all the time, but there was a time when it was hard to share what we are doing right this instant and had to settle for sharing what we had done instead.

Why, before we had satellites and wireless signals a guy would have to wait until he got back to camp to call his buddy at the office to brag about his big Labrador brook trout — and only if he was lucky enough to be staying at a camp with a telephone! 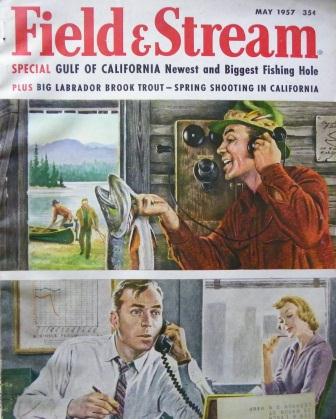 That camp phone doesn’t have a dial but it has a hand crank, used to get the attention of an operator, who then dialed the number for you (such service!). Doing it this way must have taken forever! Maybe even as long as a minute and a half.

In a minute and a half today, a video of that fish, set to music, could be halfway around the world.

Back in the old days, people used a thing called “film” to record motion and sound and they sure did not capture them with their telephones. Film came in rolls and, once it had been recorded upon, that was it. There was no reviewing or editing or deleting; when you got home from vacation you sent your film to a laboratory where it was dunked in chemical baths and developed. When the people at the laboratory got around to it, they sent the finished product back to you. With recording time measured in feet instead of megabytes, film was expensive and every scene had to count.

It might have been weeks, back in 1947, before anyone saw the hilarious footage of Bob’s legs giving out under Margaret’s weight, dunking them both. Too bad about the damage when that pipe stem hit Bob’s soft palate, though. Today that footage could go viral before lunch and might even make some money, which would sure help with the medical expenses.

That guy’s wife is named Merle and thanks to her, “we can fish old ‘Grandpa’ any time.” His friends will wear suits when they accept his invitations to stand and watch with him in his den.

Today, we have virtually unlimited invitations to watch anything we want, anywhere, anytime and we can do it wearing underwear if we like.

Of course, thanks to modern digital technology, I can edit and post pictures from the comfort of my recliner, like this one of a redwing blackbird and some of our lingering ice. It used to take a day or two and cost 29¢ to even know if a shot like this came out, and it wasn’t that long ago that the only way to share it with you was to present you with with a physical copy.

Today, cameras and images are ubiquitous and instead of those old Super 8 movies we have You Tube. I am not that old but I remember a day when a guy could go to the market and not worry if he’s got hay in his beard because some some sullen teen in an idling car with New Jersey plates just pointed her phone at him.

Twenty years ago, personal video cameras were rare. They were big, they were expensive, and they were considered a novelty. On March 3, 1991 a man named George Holliday used his video camera to capture footage of a group of Los Angeles Police Department officers brutally beating a man named Rodney King. The video played on news outlets around the world and people were outraged. Riots erupted when the officers on the tape were acquitted of brutality charges.

One of the many conversations I remember hearing regarding this incident centered on the access of ordinary, average people to modern video technology and the impact it could have on events, from the local level on up to the world stage. It was generally agreed that a shoulder-held video camera with a recording medium the size of a book was about to change everything.

I think about that every time I see someone post a picture of a fish or video of a silly dance or a funny cat. Or millions of people with phones start hittin’ the streets.

One thought on “Flashback Friday: Sharing the Memories, Not the Now”

They look badly edited, and I don't know if I'd want them in my own garden, but the colors of these peonies are crazy.
Chives, splayed.
Garlic on the right, tomatoes on the left, peppers and eggplant in the middle, with a whole lot of Vermont all around.
A cool June morning and the sides of the tomato tunnel are down. The plants are taking off and each one is wound around It's own line. It's called "training" but that's not quite correct; we're making them do it and they'll never learn to do it on their own. These are not free-range tomatoes. 🍅🍅🍅🍅🍅
Another two-fer.
Some peonies I saw today.